Japanese Prime Minister Shinzo Abe in a short time has demonstrated his capabilities and lack of fear in tackling problems using non-trivial methods. Abe likes Russia - it's in his genes. The Russian President said he was ready for a dialogue on the peace treaty with Japan on the principles of a draw. Did he decide to give the Japanese two of the four South Kuril Islands?

Japanese Prime Minister Shinzo Abe took over as prime minister late last year. He launched an ambitious plan of economic reforms where 20 trillion Japanese yen will be allocated to stimulate the Japanese economy. In the West, Abe is characterized as a right-wing nationalist. Before his visit to Moscow, the prime minister, cabinet members and parliamentarians visited Yasukuni Shrine in Tokyo to honor the Day of Remembrance of the return of the sovereignty of Japan (April 28th). The Shrine houses plaques with the names of 2.5 million Japanese soldiers and officers (including 14 war criminals ) of the Second World War.

This caused a harsh reaction in South Korea, China, and even in the U.S., but the Prime Minister said that using the word "aggression" in relation to the Japanese past was incorrect. It all depends on the way one looks at the situation, the Xinhua news agency reported. He believes that it is "natural" to honor the memory of the Japanese killed in the war, those who "gave their lives for their country," and that "the government will not pay attention to threats." 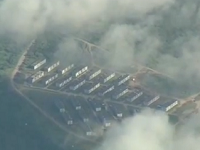 Such demarches show that Abe is capable of "swimming against the current," and it is possible that he would do that in his relations with Russia as well. His father was sympathetic towards Russia. As the Minister of Foreign Affairs, Shintaro Abe visited Moscow on several occasions and even planted 200 cherry trees in the Botanic Garden that bloom beautifully every spring.

Shinzo Abe arrived in Moscow on a three-day visit to discuss, according to President Vladimir Putin, a peace treaty between Russia and Japan, among other things. In an interview with Rossiyskaya Gazeta Abe said: "We (he and Putin) have a common political will to begin a new start in our negotiations." After that rumors emerged in the media that Putin was prepared to give the Russian territory to Japan.

These fears are not unfounded, considering the unsuccessful in this sense treaty of 1991 with China on the demarcation of the eastern part of the border with the transfer of the peninsula. There was also a treaty of 2010 with Norway on maritime delimitation in the Barents Sea and the Arctic Ocean that resulted in Russia losing 90 thousands of square kilometers in the North. The latter agreement, signed by President Dmitry Medvedev, made the countries that have territorial claims to Russia become more aggressive in their demands. Japan is no exception. When Medvedev visited the disputed islands as the Prime Minister, the Japanese Foreign Ministry officially protested.

However, Putin abruptly dismissed this scenario at a press conference. Answering a question of a Japanese reporter about the "Northern Territories" that Russia "occupies," Putin said: "This is a problem - we were not the ones who created it - we inherited it from the past, but we sincerely want to solve it on acceptable for both countries terms. If you want to help us, we need to create trust. And if you want to prevent it, you can continue asking tough questions that will be hard to get straight answers to." The Russian President reminded that the Kuril Islands were populated by Russians, and the Russian authorities were obliged to take care of them.

The South Kuril Islands, Iturup Shikotan, Kunashir and Habomai, were ceded to the Soviet Union after the Second World War. However, in 1956 the Soviet Union ratified a treaty stating that after the peace treaty, the Soviet Union will give Japan two islands. That is, given that Russia is the legal successor of the USSR, it will have to give two islands to Japan. "The only thing that can be done (at the conclusion of a peace treaty) is to remain in the position of 1956. But throughout the entire period everybody has been saying that Khrushchev made a mistake. To this day it remains unsolved, yes, he promised something, yes, he signed it, but in fact nothing has been done. If we rely on the agreement of 1956, we will still make the same mistake Khrushchev has made," lead researcher at the Center for Japanese Studies Victor Pavlyatenko told Portal Expert Online.

How does Putin intend to solve this problem? In 2005, he stated that the ownership of the islands was determined by the outcome of the Second World War, and in that sense, Russia was not going to discuss this issue with anyone. But in 2012 he made a very encouraging statement for the Japanese, saying that the dispute should be resolved on the basis of a compromise that would satisfy both parties. "Something like Hikiwake. Hikiwake is a term in judo where neither of the parties achieves victory," said the President.

As a result of the meeting, the leaders of the two countries "have agreed to advance negotiations on a peace treaty based on the documents and agreements signed to date," said the final communique. Does this mean that the Russian leadership is not going to give up the agreement of 1956? Or are there other options? So far there are no answers to these questions. Pavlyatenko, for example, believes that the territorial issue should not even be on the agenda, as the geopolitical situation has changed dramatically over 60 years. "I believe that both parties are over a historic milestone when it was necessary to invent something that needed to be solved and compromised on. Today everyone owns what they own. This issue should not exist in our relationship, in principle," said the expert.

A peace treaty with Japan is still a distant and murky prospect, but improvement in cooperation on energy, trade and investment is quite possible today. Japan is the second largest trading partner of Russia in Asia after China, with an increase in turnover of 5.3 percent in the last year to 32 billion dollars. The total accumulated investment from Japan to the Russian economy at the end of last year amounted to 10.7 billion dollars.

The strategic scope of cooperation is the fuel and energy complex. Considering the strategy of phasing out nuclear power, Japan is searching for new traditional sources of energy. Russia, on its part, needs billions of dollars of investments to fund development projects of the Far East with its ample resources. Some analysts, such as Fyodor Lukyanov, editor of the journal Russia in Global Affairs believes that "in relations between Japan and Russia the China factor is dominating. Both countries are trying to balance the rise of China as the most important force in the region, and this leads to a warming of the relations," Lukyanov told the Foreign Policy magazine.

Perhaps this factor is there, but it is not decisive. Cooperation with China, a strategic partner of Russia, does not cancel the progress in relations with Japan, the third economy in the world that seeks to improve under Abe's leadership. At the end of the visit, Putin said that "Gazprom" was ready to take part in the construction of a terminal in Japan for liquefied natural gas and gas distribution networks.

The plant, with a capacity of 15 million tons per year, will be built on the Pacific coast of Japan by the Russian Federation, and, according to the plans of "Gazprom", launched in 2018. There remains the participation of Japanese companies in the plans to build a power bridge (cable route Sakhalin-Khabarovsk-Japan 500 kV). Putin stressed that Russia was hoping to increase the number of mutually beneficial projects that will be supported by a new mutual fund - Russian-Japanese investment platform with a total capital of $1 billion.