The Pentagon plans to relocate an effective military force beginning with 200 then up to 20 000 soldiers and station them in Jordan in order to be prepared for a possible military intervention in Syria. 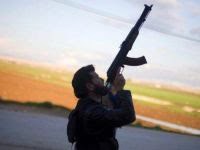 The first contingent, comprising 200 soldiers and to be sent from the 1st Armored Division from Fort Bliss, Texas, will be sent to Jordan to establish a "small headquarters" near the Jordanian border with Syria and plotting "possible military operations including rapid buildup of U.S. forces if the White House decides that a military intervention is necessary," the Los Angeles Times said citing government sources in the country.

According to the source, this decision is the first step towards a possible involvement of Washington in the military conflict in Syria.

The first contingent of the military depart this month to Jordan while "the majority will in May," adds the text.

The newspaper says that the Pentagon "has also made plans to expand the force to 20,000 or more, if necessary, including a contingent for special operations carrying equipment to find stockpiles of chemical weapons in Syria," U.S. defense units to protect Jordan's air space and conventional military units able to invade Syria if necessary."

The Secretary of Defense of the United States, Chuck Hagel, ordered the movement of troops to Jordan, while making clear that both he and President Obama remain "deeply concerned to launch a military intervention in Syria."

On the same day, the Chief of Joint Staff of the U.S. Army, General Martin Dempsey, warned that sending U.S. troops to Syria could have "unintended consequences" that could worsen the situation.

However, in autumn 2012, Dempsey supported military intervention in Syria by the United States, along with the then director of the Central Intelligence Agency (CIA), David Petraeus, the former Pentagon chief Leon Panetta and former Secretary of State of the country, Hillary Clinton.

Evidently, they are losing patience with their terrorist lackeys and their inability to sufficiently murder, maim and kill enough people, while causing widespread destruction.  The big lie machine went into gear after the Boston explosions.  The terrorist benefactors obviously don't like getting bitten on their behind by their own clients.

Chechen terrorists have been lauded by Washington as "freedom fighters," but will be hard pressed to continue to use that designation after Boston.  They don't look like such great, big freedom fighters now that they bite the hand that feeds them.

What will it take for the international community and especially the American people to wake up?  Perhaps in two to three years from now, a terrorist from Syria blowing up another U.S. city?  Then their lovely opposition darlings from Syria can bite them again  Go...go witht he wind, send more weapons to terrorists in Syria by all means.  The awakened world community can only shake their heads.