Former Polish President Lech Walesa has caused a storm of negative remarks in the European media, having said that homosexuals "have to sit on the last bench in the parliament, or even farther than that - behind the wall." Poland opposes the legalization of same-sex cohabitation, which has been promoted in Europe lately. This may become the reason to shake up Russian-Polish relations. 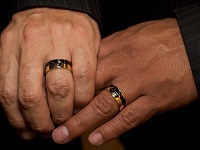 Poland is one of the last bastions of true religious forces in the West that do not agree with the "civilizational" trend of giving gay minority the majority status. The Polish parliament, the Seim, rejected three bills in late January on civil rights of homosexuals. The bills provided an opportunity to conclude so-called "partnership agreements" with significant legal rights, although without an opportunity to adopt children.

Among the initiators of the bills was the ruling party Civic Platform chaired by Prime Minister Donald Tusk. The voting showed that the party was divided on the issue. A quarter (50 of 207) of members voted against further consideration. Several members of the Cabinet do not agree with the policy of the prime minister. Thus, Justice Minister Jaroslaw Gowin said during the debate that the initiative was coming into conflict with Article 18 of the Polish Constitution, which said that "marriage is a union between a man and a woman." Deputy Minister of Education Miroslaw Orzechowski previously stated that people, who publicly came out as homosexual individuals, could not work as teachers.

In this sense, the demarche of Walesa, as the legendary leader of Solidarity, an anti-Communist, struck a severe blow on the offensive of homosexual individuals not only in Poland but also in Europe. "Lech Walesa is not like Komsomol activist Kwasniewski, who is a banner of bourgeois democracy, freedom, tolerance and comprehensive pederasty that can only be," Vladimir Skachko, the Chief Editor of the Kiev Telegraph described the Nobel Peace Prize winner.

On Friday, speaking on TVN24, Walesa said that homosexuals were trying to dominate in public life. "We respect the majority, we respect democracy. It is the majority that built democracy, and democracy belongs to it. And now we have the minority willing to lead the majority," said Walesa. "I do not want this minority, with which I disagree, but which I am tolerant to, to parade in the streets, turning heads of my children and grandchildren," said Walesa.

Immediately after this statement, Walesa stopped being "one of the good guys" for the "tolerant" West and became "a KGB agent named Bolek."

He was accused of dealing with personal problems of material nature, rather than supporting the gains of democracy. "Despite the experience of the presidency and the years of cooperation with the liberal intelligentsia, which was a pillar of the Polish transformation - he is still the same electrician from a shipyard. He is conservative in his views, with Virgin Mary in his lapel and sensitive to any manifestation of "sacrilege" (in particular, he opposed Madonna's concert in Warsaw)," independent portal Salon24.pl wrote.

The website regrets that Walesa could not conceal his dislike of homosexuals in public, so his merits "could not be used effectively by the Polish state." What was acceptable 20 years ago is now unacceptable," the website said. It is difficult not to agree with that: the decay of the Western society has reached its peak during an unprecedentedly short period of time.

European and liberal newspapers cracked down on Walesa as well. Der Spiegel wrote, for example, that Lech Walesa was a tactless man. Austrian website Heute.at wrote that Walesa afforded "shocking attacks on gays." French newspaper Le Parisien wrote that he was happy to answer a provocative question and "showed that he did not share progressive views much."

While France and other European countries are making a decisive step towards same-sex, "humanism", one should not expect that his supporters in Poland will turn down the aggressive defense of their positions. Thus, parliamentary party Palikot Movement nominated Anna Grodzka - Poland's first-ever transsexual MP, to the position of the Deputy Speaker of the Seim. Party leader Janusz Palikot said that her candidacy symbolized "the philosophy of equality and anti-discrimination."

In general, Poland sees decline in the legalization of same-sex unions, and this vector of development is unacceptable for the country. A Polish textbook for nurses and midwives describes homosexuality as "pathology." According to recent polls, 60 percent of the Poles oppose gay marriage. Several bishops of the Roman Catholic Church thanked members of the Polish parliament for rejecting the law on "partnership". In this context, the position of the Polish society coincides with that of Russia, and this is a good reason to pull the Russian-Polish relations out of stagnation.