Pope Benedict XVI has shocked the world by announcing his decision to resign on February 28, stating that his advanced age and failing health rendered him incapable to have the capacity to administer his function as the successor of Peter as the Head of the Catholic Church, a clear sign he understands the changing times and demands of the media. 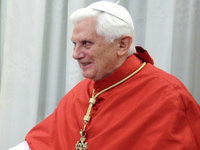 In a message delivered in Latin to a group of Cardinals released this morning, Pope Benedict XVI said: "After having repeatedly examined my conscience before God, I have come to the certainty that my strengths, due to an advanced age, are no longer suited to an adequate exercise of the Petrine ministry...

"In today's world, subject to so many rapid changes and shaken by questions of deep relevance for the life of faith, in order to govern the bark of Saint Peter and proclaim the Gospel, both strength of mind and body are necessary, strength which in the last few months, has deteriorated in me to the extent that I have had to recognise my incapacity to adequately fulfill the ministry entrusted to me".

Benedict XVI was born Joseph Ratzinger in 1927 in Germany and was elected Pope in 2005 after the death of Pope John Paul II, at 78 years of age, becoming one of the oldest Popes in history upon election. Currently 85, his reference to not having the capacity to fulfill his ministry would be due to the fact that he can no longer travel and perform his day-to-day functions or to perform these and travel.

Pope Benedict will step down officially in the evening of February 28 and the election process of his successor will begin, probably becoming finalized at the end of March or beginning of April. This is the first time a Pope has resigned since the early fifteenth century. Gregory XII (1406 to 1415) was the last Pope to abdicate, and before him it was Pope Saint Celestine V (who was Pope for 161 days in 1294).

Cardinal Joseph Ratzinger was head of the Congregation for the Doctrine of the Faith for 24 years before his election as Pope in the midst of the child abuse scandal in the Catholic Church, one which he confronted with determination, while at the same time he tried to continue the work of John Paul II making the Papacy a visible figure of the Roman Catholic Church, a public figure as well as an administrator and a world figure not confined only to Rome.

It is here that the common sense and grasp of the modern world shown by Pope Benedict is clear. He understood the power of the media in today's world and that an ailing, frail old man at the helm of an institution, appearing less and less in public, does not strike a chord with today's youth, the future of the Church.