Pakistan on the verge of military coup

Pakistan has never been a quiet place. The situation in this Asian country is always strained to the limit. Various protests that often end in bloodshed often occur in Islamabad. Now the country is faced with another such situation that could end in a military conflict or uprising. 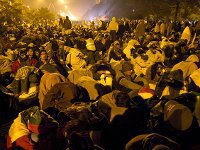 Several days ago mass protests took place in Islamabad. Forty thousand people came out to the central avenue of the Pakistani capital. They blocked traffic, waving banners and shouting anti-government slogans. Participants of the "March of Millions" accused the security forces of killing those who disagree with the course of the authorities. The organizer of the "March of Millions" is the authoritative Islamic theologian, leader of the Islamic movement "Tehreek-e-Minhaj-ul-Quran" Tahir Qadri. He said that people would not leave until the authorities disband the provincial and federal parliaments and declare general parliamentary elections under the strict supervision of the Supreme Court and the army. The organizers intend to create in the capital something similar to Tahrir Square in Egypt, where protests resulted in a change of power a few years ago.

Protesters cheered the Supreme Court of Pakistan that decided to arrest the current prime minister Raja Pervez Ashraf. He was accused of corruption and embezzlement of public funds, but the government refused to comply with this ruling. The situation in the Pakistani capital remains tense due to the protests. The city is guarded by police and military relocated to the capital from other cities.

The political crisis in Pakistan caused by the "March of Millions" is becoming more acute. Demonstrators led by Islamic scholar Tahir Qadri demanded resignation of the government. But the president's supporters say that they are ready for "any situation." The theory that the leader of the march is secretly controlled by the military was confirmed amid escalating confrontation. The protests were supported by Pervez Musharraf, the former military ruler of the country. He is now in exile, but expressed his willingness to return to his homeland. Many experts believe that the army may use the "Arab Spring" technique to overthrow the civil authorities. On the second day of the "March of Millions" slogans were heard about the resignation of senior Pakistani leadership and dissolution of the Parliament.

When protesters approached the government buildings, the leader of the march, scholar Tahir Qadri urged the supporters to accomplish a change of the regime and start a radical political reform. "We do not have a parliament - it is a gang of robbers, looters and thieves. Our legislators are breaking the law," shouted Tahir Qadri. After the Supreme Court issued a ruling on the arrest of Raja Pervez Ashraf on January 15th, some experts began talks that President Asif Ali Zardari may leave the country. Also, on the night of January 15th, his family immediately flew to Dubai. The president stayed in the country and is closely monitoring the events from his residence.

Exiled General Musharraf, who supported Tahir Qadri, said that he was hoping that the authorities would not use force against the people. He also called on the military to take stronger action, because the leadership of Pakistan has lost its right to govern. Meanwhile, the army maintained its position of non-interference in the conflict between the opposition and the civil authorities. Ashfaq Parvez Kayani, the Chief of Army Staff, assured that he would not allow a return to the past, when the military was an independent force and the final arbiter in the politics of Pakistan. However, some experts believe that some of the army leaders want to use the current situation to try to have an independent role, using the technology of the "Arab Spring."

The leader of the protesters Tahir Qadri is a prominent figure and has his own reasons to organize protests. When the immorality of the country is discussed by a religious figure, it means serious consequences for the authorities. Theologian Tahir Qadri, who has Canadian citizenship, is head of the movement "The path of the Quran." He is a professor at Punjab University and specializes in constitutional law. In 1999, Tahir Qadri supported Musharraf's rebellion, but in 2006 he emigrated from the country because of disagreements with him. He settled in Canada and started raising money for the needs of the Pakistani Muslim community. He is a "moderate Islamist." Qadri returned to his home country on December 23, 2012, immediately after the murder of an influential politician Bashir Ahmad Bilour, an ardent opponent of Taliban. On the way from the airport the crowd threw rose petals on Qadri's car.

The theologian immediately announced his intention to start the path of revolutionary change and turn the Pakistani society to the path of Tahrir Square. He demanded dissolution of the federal parliament, cancelation of the general elections scheduled for March, and appointment of an interim government that would organize new elections under the army control. Tahir Qadri claims to be an independent leader, but local experts believe him to be a military puppet with a taste for military coups.

This fact is confirmed by his motto about transferring power to the military. the Daily Times of Pakistan wrote that the consequences, given the country's history, could be disastrous.

The role of U.S. intelligence, seeking to re-set the US-Pakistani relations, cannot be ruled out either. These relations have been rapidly deteriorating since the elimination of Osama bin Laden in Abbottabad, Pakistan by the U.S. Special Forces. To retaliate, Pakistan declassified the chief of the U.S. intelligence in the region, then arrested CIA informants who brought American intelligence to bin Laden. Persistent attacks of the U.S. drone on border areas with Afghanistan, where the Taliban are hiding, added fuel to the fire. In addition, Washington has cut the financial aid to Pakistan by over a third. In response, Islamabad made U.S. military trainers leave the country, and demanded that U.S. troops leave Shamsi air base. Deputy U.S. Ambassador to Pakistan Richard Hoagland, commenting on the events in Islamabad, said that the U.S. government did not support the actions of parties or individuals. "Our goal is to support free and fair elections in Pakistan," he added.

Note that the Pakistani authorities are working on establishing amicable relations with China, trying to distance from the United States. Washington does not like this situation and will try to overthrow this government and president in every way. However, it will do this thought someone else, for example, Tahir Qadri.

This opinion was expressed by Vyacheslav Belokrenitsky, deputy director of the Institute of Oriental Studies. "The conflict in Pakistan is ongoing and will continue for a long time. The government may dissolve the Supreme Court. The situation is critical, the confrontation between the branches of the government is intense. It may take quite a long time and end in a military coup. This is how Pakistan usually gets out of a political crisis," said Belokrenitsky