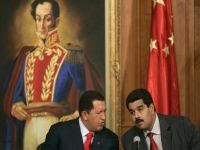 In Venezuela, the people receive their daily dose of news about President Hugo Chávez's recuperation process in Cuba, while praying for his health and waiting for his return, to be sworn in on the 10th of January 2013.

The daily news from Cuba is published by Vice-President Nicolás Maduro, whose wife, Cilia Flores, the Venezuelan Attorney General, is one of those people who are attending President Hugo Chávez in La Havana.

Both are very close to the President and belong to his inner circle. Before Hugo Chávez left for surgery in La Havana, he recommended his millions of followers to elect Nicolás Maduro, should new presidential elections be necessary.

Nicolás Maduro, born on the 23rd of November 1962 in Caracas, has been Venezuela's Foreign Minister since 2006 and Vice-President since October 2012, currently holding both offices.

He began his political career as a trade union representative for the workers of the Caracas Metro system in the 1970s. Nicolás Maduro was elected as Deputy to the National Constituent Assembly in 1999, the National Assembly in 2000 and 2005, representing the Capital District.

As Foreign Minister, he took part in several meetings of ALBA, CELAC, UNASUR and MERCOSUR. In autumn 2012, he travelled to Tehran, where he participated in the NAM summit (Non-Aligned Movement) as Venezuela's delegate. Furthermore he was involved in political and economic talks with Venezuela's strategic partners, China and Russia.

Thus, he has acquired know-how and a high profile in President Chavez's administration team. Nicolás Maduro is well liked within PSUV, the United Socialist Party of Venezuela, for his soft-spoken, polite manner. He is open to dialogue, yet firm in his position.

At the same time, he is a favourite of the Cuban leadership, Fidel and Raúl Castro. Since 2011, when Hugo Chávez underwent surgery in La Havana, several times, Nicolás Maduro travelled back and forth, visiting the Venezuelan President in the hospital.

He has acted as a faithful ambassador of Hugo Chávez's views and is a strong supporter of the Bolivarian Revolution, just like his wife, lawyer Cilia Flores, who helped to free Hugo Chávez from prison in 1992, during the oppressive Fourth Republic. She led the legal team that won his freedom two years later. Government circles call them a "power couple."

On the 9th of December 2012, President Hugo Chávez signed a decree allowing the Vice-President to make his own administrative and economic decisions. He may appoint public officials, decree expropriations and transfer funds to different ministries.

All in all, the Venezuelan economy has done well in 2012, growing by 5.5 percent, as Nelson Merentes, the Vice-President of Banco Central de Venezuela (BCV), announced. He pointed out that Venezuela was among the five Latin American countries with the best economic growth.

Due to the Great Venezuelan Housing Mission, the construction sector grew by 16.8 percent in 2012. Commerce and trade increased from 6.5 percent growth in 2011 to 9.2 percent in 2012, according to Nelson Merentes.

The news media Patria Grande reported that the Great Venezuelan Housing Mission fulfilled its aim, set for 2012. Minister Rafael Ramírez informed that 250.537 new homes were constructed. For 2013, the building of 380.000 more lodgings are planned.

Meanwhile, all of the 20 new (and old) PSUV governors have been sworn in, in their respective states. They all promised to carry on with the Bolivarian programme, the social missions for agricultural and industrial development, education, health care, housing, medical services, pensions, prison reforms and safety.

Some analysts note that a collective leadership has been formed and that the Bolivarian Revolution has a broad base to rely on. It will certainly continue, with or without President Chávez.

On the "Campo de Carabobo," one of the Bolivarian Government's symbolic sites, this past week the leaders of PSUV swore an oath of loyalty to Comandante Chávez. Patria Grande quoted Diosdado Cabello, the first Vice-President of PSUV, "I swear by the God of my forefathers to be loyal to the Commander of the Revolution, to follow President Chávez and never betray the Venezuelan people."

All of the PSUV leaders swore to respect the Venezuelan Constitution, the Venezuelan nation, and to stand united with Hugo Chávez. Diosdado Cabello confirmed that neither the opposition nor external menaces would be able to divide them. "We are all united with Comandante Chávez," he said.

This will surely help Hugo Chávez on his way to regaining all the strength he needs to tackle the tasks waiting for him in 2013.