The Chief of staff of the army for the defence of Israel, General Benny Gantz, visited the Golan Heights region and pointed out that the operations of the Syrian forces against armed groups could lead to military interference with the Israeli regime. The Israeli regime threatened, this Sunday, to pursue a military intervention in Syria. 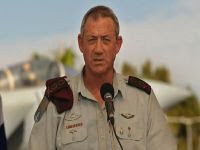 The Israeli regime threatened, this Sunday, to pursue a military intervention in Syria, when three Syrian tanks penetrated the demilitarized zone of the Golan Heights Plateau, with the aim of attacking armed terrorist groups that headed in the direction of Israel to seek refuge and escape the justice of Damascus.

"The Syrian conflict can pass into the territory of Israel, but in this case the Israeli army will oppose it with all of its military might," stressed Gantz, then added that "any attempt to get Israel caught in the internal conflict of Syria is destined to failure."

He also referred to alleged clashes that are developing between forces of the Syrian Government and armed terrorists in this region.

"The 36th Division is ready at any time in which the fire changes direction and comes to us," Gantz said.

With respect to the incursion of three Syrian army tanks into the Golan Heights, he stressed that "the Israeli army has instructions to be kept on alert in that area".

Syrian tanks that entered the demilitarized zone on Saturday still have not left the area. Tel Aviv sent a complaint for the examination of the Commander of the United Nations (UN) forces in the the region of the Golan Heights.

For its part, Lebanese sources reported that this Sunday, Israeli military helicopters flew over the occupied region of the Golan Heights and the occupied Shab'a farmlands, in the South of Lebanon.

In 1967, the Israeli regime occupied the Golan Heights, during the so-called Six-Day War, in order to have access to the Sea of Galilee, a main source of fresh water for the Israelis. In 1981 it incorporated it into its territory (North), by imposing its legal, administrative and judicial system and offering the inhabitants Israeli citizenship.

In December 1981, Resolution 497 of the UN Security Council declared that the Israeli decision was "null and void." Today there is a strip of territory administered by the United Nations that separates the contenders who still compete for possession, amid a precarious peace.

The whole area of 1,860 square kilometers in which prior to 1967 more than 150,000 Syrians lived, was devastated, and at present there are little more than 30,000 inhabitants remaining.

Ed.  Two interesting points is that the UN declaired the Israeli occupation of the Golan Heights illegal and "without international legal effect" (section 1).  Therefore, they have no right to take any action against Syria on legal Syrian territory.

The second point is that armed terrorists were fleeing TO Israel, which implies foreknowledge that they would be not only protected there, but also that they are serving the interests of the State of Israel to destabilize the Syrian government.


Translated from the Spanish version and appended by: