Ukraine and Russia: Nothing much, nothing special

Ukrainian President Viktor Yanukovych visited Moscow on October 22 to negotiate with his Russian counterpart, Vladimir Putin. A number of results were expected from the meeting of the two leaders. They included a significant price reduction of gas for Ukraine and a breakthrough in its advancement to the Customs Union. The real achievements were much more modest. 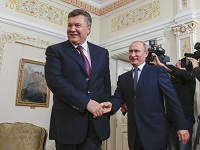 No other meeting between the two leaders was prepared in such a hurry. Ten days ago there was no information about it, and a week before the meeting the first reports were accompanied with the following words: "According to a well-informed source in the Presidential Administration of Ukraine who said in confidence..."

Three to five days before the visit, its program was widely discussed in the media and reminded a preparation for a revolution in the Russian-Ukrainian relations. The goals named included a breakthrough in the advancement of Ukraine towards the Customs Union, an agreement for a significant decrease in the price of Russian gas, and the solution of all problems of the Russian Black Sea Fleet in Sevastopol.

The reality was much more modest. In practice, only an agreement on readmission (deportation of illegal migrants) was reached, some aspects of industrial cooperation in various sectors were clarified, and the parties have agreed on cooperation in space - along with Kazakhstan.

Unlike the space business, the earth business was resolved to a far lesser extent. In such cases, diplomats usually say: "The two parties exchanged opinions on matters of mutual interest." Ordinary people prefer to speak more clearly: "Each party stuck to their opinion," or even "The negotiations went nowhere."

Yanukovych's statement that Ukraine is thinking about extending cooperation with the Customs Union (CU) or wants to get a "fair and economically reasonable price for gas" cannot be considered a breakthrough or even "progress toward the goal." Cooperation with the CU does not have to be extended, one can either join it or not, the same way one cannot be "a little bit pregnant."

Unfortunately, Ukraine has a different opinion. We are not talking about professional dreamers like "orange revolutionaries", dreaming of the day when Kiev is accepted into the European Union. We are talking about sound and sensible politicians and managers, whose opinion was recently expressed by Ukrainian Prime Minister Mykola Azarov during a visit to the Odessa region.

At the beginning of his speech, he admitted that in the case of entry into the Customs Union, Ukrainians can count on gas at $160 per thousand cubic meters - instead of the current $450. At the same time, Kiev is very interested in a free trade area with the EU. The EU is very sensitive about the advancement of Ukraine to the east and refuses to ease its trading conditions in the case of its entry into the CU.

Azarov initially formulated the issue quite correctly. "We are faced with a dilemma. We are faced with a very difficult choice. And in fact we are in a situation where we do not have any choice. Can one move in both directions?" But then he answered his own question with childlike naiveté: "Of course one can".

What can you do if the officials of a large country are fans of political non-science fiction? One cannot expect progress at the negotiations on strategic issues, even if meetings of the Presidents of Ukraine and Russia take place weekly. The result will only be listening to the "wants" by the Moscow partners. Kiev will continue in its idealistic desire to kill two birds with one stone, after 20 years of independence that has been leading the country only to economic stagnation and backwardness.

Not surprisingly, the coverage of these negotiations did not make headlines. In Ukraine, both pro-government and the opposition media gave little information about it. Russia's Channel One in the main daily show "Time" featured a two-minute video about the event 10 minutes into the show after several other broadcast news. Apparently, this was done only out of respect for the leader who sacrificed a few hours of his time to talk with his Ukrainian counterpart.

However, the lack of visible results of the meeting in the form of signed documents does not mean it was a complete waste of time. After all, many important, if not strategic, issues can be discussed without the involvement of the press. One of them, most likely, was the discussion of the Kremlin's position regarding the upcoming   elections in Ukraine on Sunday. In most post-Soviet countries the elections have long turned from the free will of the voters to the attempts to answer the question: "How will the West look at their results?"

Given the current cool attitude of the American and European political elite to the leadership of Ukraine, we can expect from the former the statements that the vote was "undemocratic, non-transparent, and did not reflect the will of the citizens." This, most likely, will be followed by different sanctions - from the actual "boycott" of the ruling circles to the support of the opposition to overthrow them in the form of a "color revolution" or something similar. In this situation, the political support of a powerful regional superpower located next door will come in handy.

The statement of President Putin on this matter is in the best traditions of the diplomatic language: "We sincerely hope that the elections to the Verkhovna Rada will ensure further successful democratic development of fraternal Ukraine, and we are interested in an additional boost for the close cooperation between our countries as a result of the vote."

By and large, the hypothetical solution of other strategic issues in the Russian-Ukrainian cooperation will depend on the outcome of the abovementioned elections. Specific forecasts are possible only after at least the preliminary results are announced.

In the meantime, we can say that the next round of negotiations between Presidents Yanukovych and Putin has ended like most of these meetings over the past two years, with virtually no results.

President of "Politics", a member of the State Duma Committee on Budget and Taxes Vyacheslav Nikonov commented on the visit of Viktor Yanukovych to Moscow for "Pravda.Ru."

"Ukraine is the most important partner for Russia in the former Soviet Union, though not the easiest to deal with. It would be wrong to say that Ukraine has some pro-Russian politicians, because Ukrainian politicians are pro-Ukrainian. Of course, they care about the interests of their own country, and not the interests of Russia.

The main fundamental contradiction of the Ukrainian politics is that in terms of economic and political interests, they should be very interested in the integration with Russia and the Customs Union. The members of the CU are their largest trading partners, and participation in the processes that take place in the single economic area would be a great help for Ukraine. It is because of lack of participation in these formats that Ukraine loses economically. It is no accident that the average standard of living in Ukraine, GDP per capita on average, is three times lower than in any of the countries of the Customs Union. Ukraine loses much from a lack of integration. Objectively, it must be integrated.

However, the subjective Ukrainian elite is rushing to the West and is interested in issues of integration with Europe rather than with Russia and Belarus. This is a serious fundamental contradiction. Now, however, due to the case with Timoshenko, Kiev's relations with the West are largely frozen. Therefore, the Ukrainian elite is starting to pay more attention to its relations with Russia.

Regarding the visit of Viktor Yanukovych, it must be considered in the context of the election. Now the final stage of the election campaign in Ukraine is under way. As usual, all the trump cards are saved for the last days. Yanukovych's visit to Moscow could help the Party of Regions leading the campaign."