Scottish Office Minister David Mundell announced that in the fall of 2014 a referendum will take place to find out whether the Scottish people want autonomy or independence from Britain, or whether they prefer Scotland to still be a part of the United Kingdom. Gaelic freedom will thus be placed on scales along with people's doubts about the ability of the new state to survive in the time of crisis. 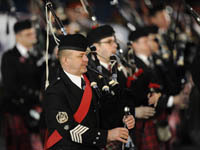 The question of Scotland's separation from the UK appeared a long time ago. Scotland has been a part of the UK since 1707. In 1997, Scotland obtained limited autonomy within the UK. Two years later, Scotland received its own executive power and parliament. The Scottish autonomy embraces such fields as education, transportation, health care, culture and environmental protection. Financial planning, social and, of course, foreign policy remained in the jurisdiction of the UK.

The echoes of Scottish separatism can be found in the classic Scottish literature. For example, writer and poet Hugh MacDiarmid was known for his pro-Scottish views. In 1928, he was one of the originators of the establishment of the national party of Scotland. George Orwell called MacDiarmid a typical representative of "Celtic nationalism."

A surge of Scottish separatism occurred during the 1970s, when clashes between IRA fighters and the British Army became especially frequent in Northern Ireland. Scottish nationalists also demanded official London should give them independence, but the effort was no success.

Another reason to raise the issue of Scottish independence was the victory of the Scottish Nationalist Party in the elections to the Scottish Parliament in May 2011. The party won 69 out of 129 possible seats. SNP party leader Alexander Salmond called for a referendum about the separation of Scotland from the United Kingdom. The Scottish Nationalist Party on the rights of the parliamentary majority can afford such undertakings, taking into consideration the fact that the SNP has been pursuing this goal for more than ten years.

No sooner said than done, although not at once. In late May 2012, the Scottish government initiated a campaign called "Yes Scotland". The goal was to convince the residents of the autonomy that living apart from the UK would be more comfortable and better for them. The campaign will run for two years. During this time, the organizers will have to collect one million signatures for the Declaration of Independence from Great Britain. In this case, the independence of the five-million-strong Scotland will become a fact.

Alexander Salmond insists that if Scotland is able to deal with the problems of health care, culture, education and other areas in the management of the autonomy, then the local parliament will be able to handle economic issues. Deputy First Minister of the autonomy and the SNP leader Nicola Sturgeon said that the oil fields of the North Sea continental shelf, as well as exports of Scotch whiskey would ensure the economic independence of Scotland. Sturgeon asserts that the Scottish have the right, just like citizens of other countries, to determine the economic policy of their state. Moreover, she claims that it would not be complete independence, because the British monarch will continue to be the head of Scotland. In addition, some questions could be solved together with Britain, should the need arise.

Alexander Salmond, hinting at the possible advantages of Scotland's independence, pointed out that in this case Scotland would not participate in any military operations outside the country, nor would it allow the deployment of nuclear weapons on its territory.

According to Reuters, about 40 percent of the population support Scotland's independence. A half of the population of Scotland is opposed to separation from the United Kingdom. Ten percent have not decided on their preferences yet.

Salmond suggested that Scotland could enter the EU and the euro area after separation. However, London did not agree with it. UK Foreign Minister William Hague warned that the export of whiskey, the national product of Scotland, would be significantly reduced should the autonomy separate from the United Kingdom. This may hurt the economy of the independent Scotland.

Prime Minister David Cameron also spoke against the separation of Scotland from the United Kingdom. He believes that a referendum on such a serious issue should be organized by London, not Edinburgh. The Labour Party supported Cameron on that.

However, the referendum will take place despite many objections. In the fall of 2014, the citizens of Scotland will decide whether their independence should be or not. However, do all respondents realize possible consequences of Scotland's separation from the UK in national and global scale?

Will Scotland's independence be economically advantageous? The head of Better Together movement Alistair Darling said that it would definitely be better for Scotland to remain one country with the UK. The reasons for that are plentiful. Even considering the oil reserves in Scotland, the independence of the autonomy will not mean that all revenues from oil sales will be automatically wired to the treasury of the new independent state. Firstly, oil reserves are not infinite. Secondly, the extraction and processing of oil near Scotland involves many companies from the UK and other countries. It is not yet clear how the oil revenues should be shared if Scotland moves away from the UK.

Of course, one can develop alternative sources of energy, like other European countries do. Scotland does it already, although at the expense of the Treasury of the United Kingdom. Should Scotland gain independence, the funding of the renewable energy sources will be halved.

Darling also pointed out that in difficult economic realities of today, under the conditions of the global economic crisis, it is better for Scotland to stay in the UK.  It is easier to survive together economically. Scotland has economic ties with other parts of the country. Once those ties are cut, negative consequences will emerge both in Scotland and in the whole Kingdom. Should problems arise, Wales, England and Northern Ireland will have to credit and subsidize the Scottish economy. Does anybody want it?

The national mentality is an important part of life in Scotland, as well as in any other country of the world. According to Alistair Darling, the people of Scotland are proud of being both Scottish and British citizens. The two notions are practically inseparable. One should not artificially break the mental foundations of the nation: it can be fraught with many negative consequences in the future.

As for global consequences, the official London fears that the separation of Scotland from the country will undermine the international prestige of the United Kingdom. The United Kingdom may thus give a negative example to other states of Europe and the world, promoting the rise of political and social instability. Spain, Greece, Italy and Romania will be watching Scotland's way to independence.