Chávez is reelected for the third time with 54.84%

Venezuelan President Hugo Chavez was reelected on Sunday for the third time, with 54.84% of the vote, compared to 44% for the opposition, Henrique Capriles, informed the National Electoral Council (NEC), with 95.58% of votes counted . Chavez received more than 7.8 million votes, beating Capriles by about 1.4 million. Socialist supporters took to the streets of the capital Caracas to celebrate with fireworks, flags and honking horns.

Once  their hardest electoral victory was confirmed, Chávez sent a message via Twitter. "Thanks to my beloved people!! Viva Venezuela!! Viva Bolivar!!" Wrote Chavez, 58, who took office in 1999.

If his health permits, may remain until 2019. In June 2011, he had a diagnosis of cancer. He was treated in Cuba and said he was cured. However, in February this year, he suffered a relapse, which raised rumors about his political future.

Chavez spoke little during the campaign about his fight with cancer, which since June 2011 has included surgery to remove tumors from his pelvic region as well as chemotherapy and radiation treatment. He has said his most recent tests showed no sign of illness.

"It's my word of gratitude to all those who voted against us, a recognition of our democratic disposition," Chavez said to thousands of followers in a speech at the Miraflores Palace in downtown Caracas. The president got more than 551,900 votes in the last election, while the opposition obtained 1.85 million of the vote.

In the campaign committee of Capriles, the mood was sad. The opposition candidate conceded defeat and congratulated his opponent. "I want to congratulate the candidate, the President," said Capriles. The opposition will now have to regroup for the state elections in December.

The majority of the Venezuelan population, 80.85%, went to the polls. In 2006, turnout was 74%.  The information was provided by Dow Jones and Associated Press. 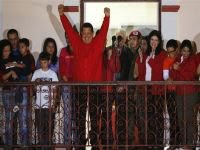