Ottoman Empire wants to get rid of Syria’s political corpse

The tension on the Syrian-Turkish border has reached its peak. Every time when the Syrians accidentally or intentionally launch a shell on the neighboring country, Turkey responds with powerful artillery. Ankara blames the Assad for the escalation of violence in the region. 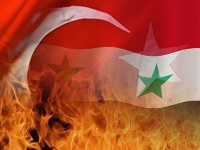 On October 3, unidentified individuals launched a shell from the Syrian side. The shell exploded in the Turkish border town of Akchakale. As a result, 5 people were killed and 13 were injured when the shell struck a residential building. For Syria, that day was marked with bloody attacks in Aleppo, in which more than 40 people were killed. The blasts ripped through the district controlled by government forces.

It's no secret that Ankara from the very beginning openly supported the Syrian rebels. Erdogan's government has repeatedly said that it was inadmissible to continue the military operations of government forces against the people of Syria. However, the authorities diplomatically silenced the punitive actions the Turkish army against the Kurds. Ankara fully justifies its actions in regard to the struggle against Kurdish separatists, who intensified their subversive activities in the summer of 2012. Simultaneously, the Kurds of Syria announced the establishment of the Western Kurdistan with capital in Afrin. Analysts note that this event became a major blow for Turkey, as the territory of the Western Kurdistan is located in close proximity to its borders.

When deciding on local military operations in Syria, Turkey, apparently, took account of the possibility to expand the struggle against the Kurds, if required. Whatever it was, Turkey's response to the provocation of October 3 was extremely tough. Prime Minister Recep Tayyip Erdogan, the next day asked a permission from the Parliament to conduct cross-border operations in Syria. As many as 320 deputies supported the beginning of combat actions, 129 voted against it. Representatives of the opposition Republican People's Party (CHP) and the Kurdish Peace and Democracy Party stood up against the escalation of the conflict. The Vice Chairman of CHP criticized Interior Minister Ahmet Davutoglu for his adventurism, which could further aggravate the situation in the Syrian direction.

Officials in Ankara were quick to calm the world community down: the combat action will be local. In particular, Turkish Deputy Prime Minister said: "Turkey does not want the war. The Parliament's decision today is not a declaration of the beginning of a military action."

Prime Minister Recep Tayyip Erdogan confirmed that the country's armed forces received the mandate to conduct cross-border operations. However, he added, it did not mean that Turkey declared war on Syria.

The response of the Turkish Army to the incident of October 3 came shortly. The next day, the Turkish artillery struck a powerful blow on the Syrian positions. Three tanks, two armored personnel carriers and a howitzer were destroyed in the attack, ten soldiers were killed.

The Syrian authorities apologized to Turkey for the tragic incident that led to the deaths of civilians in Akchakale. The message was sent through the UN. Syria promised to do everything possible to ensure that such incidents do not happen again.

However, the contradictions between Ankara and Damascus may worsen even more in the coming months. On October 8th, the world media continued to report about the deployment of additional tank and artillery forces to the border. Official statements from top officials confirm that Turkey, with the support of the West, took the course to overthrow the sitting president of Syria. In September, Erdogan outspokenly expressed his views on the Syrian issue. He called Bashar al-Assad a political corpse. Later, he offered to replace Assad with a "conscientious man" - Vice President Farouk al-Sharaa.

Syrian Information Minister Omran Al-Zobi cracked down on Turkey's Erdogan on the Syrian national television. "We do not live in the era of the Ottoman Empire. I encourage the Turkish government to relinquish power in favor of the personalities that will be acceptable to the Turkish people," he said.

The current escalation between Ankara and Damascus demonstrates that the scenario approved by the U.S. and its NATO allies continues to develop in Syria. The Syrians have already agreed for a no-fly zone over a part of the border area. In these circumstances, Iran is unlikely to accept the loss of Damascus, its main ally in the region. Forecasts are unfavorable: analysts say that with the beginning of hostilities between Syria and Turkey, the world makes another step towards a dangerous point.