Is there still invisible Berlin Wall in Germany?

Even 22 years after the reunification of Germany, there are still significant differences between the eastern and western parts of the country. Eastern Germans and Western Germans largely view each other as strangers and make up stories about each other. However, there is something that unites them.

For the anniversary of German unity celebrated on October 3, German tabloid Bild cited the results of the survey they conducted. Amazingly, those who grew up in East Germany are often more open to the West than the West Germans to the East, discovered the journalists of Bild. The poll conducted between September 28 and October 1 of 2012 had 1,005 participants from Eastern and Western Germany. 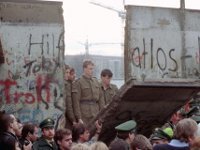 37 percent of all respondents called East Germans grumpy and "dissatisfied". Only 17 percent believe this to be an inherent trait of their western neighbors. "Dependence of bosses", according to 29 percent, is more typical for the residents of the former East Germany than the Germans of the western lands (12 percent). "Envy" is a typical quality of the Easterners, 30 percent of the respondents believe, and only 13 percent think that it is typical for West Germans.

As for the issues of modern politics, there is little disagreement between the eastern and western Germans. 64 percent of the respondents both in the East and in the West are indifferent to the Federal President Joachim Gauck and Chancellor Angela Merkel. Both politicians are from East Germany. Nearly a third of East German respondents (36 percent) and almost as many West Germans (37 percent) believe that the security service of ex-GDR "Stasi" still continues to have an impact on the society. Nearly equal number of both eastern and western Germans thinks the opposite.

The first comment to the article posed a rhetorical question: "What about the difference in mentality between the residents of Schleswig-Holstein and Bavaria?" The irony is quite appropriate, since Bavaria located in the south and Schleswig-Holstein located in the north also have their differences. Bavarians have even their own special dialect of German - Bairisch, furthest from the standard German (or the so-called Standarddeutsch or Hochdeutsch). There are other differences in lifestyle, for example, dislike of militarized Prussian (Prussia originally supplied men to the officer corps of Germany), etc. It seems, however, that the differences between the "north-south" - for historical reasons - are less striking than between the east and the west of the country. The neighboring Italy shows a stark contrast between the industrial North and the agrarian South, and in Germany, the separation occurred according to a different geographical parameter.

"I never heard such nonsense," an anonymous blogger is outraged. "Each Westerner wants to know everything about the East Germans, but none of them have a clue." Another visitor commented: "Large international travel guide persistently warns against visiting the GDR. This says it all."

In later 1980s massive rallies were held near Soviet garrison and people were walking by with candles in their hands chanting "Gorby! Gorby!" The love to the Soviet leader who later gave his tested allies to his new Western friends, soon gave way to another mood. In the fall of 1989, in Dresden, Berlin and Leipzig for the first time a new slogan inspired by the Soviet "perestroika" has emerged - "Wir sind ein Volk" ("We - the people"), that was quickly changed into Wir sind das Volk ("We - one people"). Both parts of Germany rushed into unification. Each side had its reasons. "Focus on money," mentioned in the latest poll, was an effective incentive for the West Germans. In the former East Germany they quickly concocted the "Department of custody," Treuhand, that instantly turned into the world's largest trader controlling over nine thousand former state enterprises, about two million hectares of land and two million hectares of forest land.

National, or, as they called it "people" wealth was sold at the bargain market prices, making the East Germans people of second grade. East Germans no less than their greedy brethren sought to reunite the two parts of Germany. An unofficial poll was conducted at the time among the East Germans who had a chance to visit the Western neighbor to find out what impressed them there the most. The poll was conducted among people of different ages, gender, social groups and conditions. Surprisingly, the answer was the same: Sauberkeit - cleanliness. Soviet troops were pleased by the cleanliness of the cities in East Germany, but if the East Germans admired the cleanliness of its neighbor, it meant that there was something unusual there. The cities in West Germany were so clean, that one could leave their car in their house slippers and go to a supermarket in any weather. The cleanliness of the water in the open air pools between two cities that used to be separated by a border was also striking. However, along with the natural enthusiasm there was some clouding of common sense and reason.

The residents from the West Germany firmly believed that everything was better there. Some situations were near ridiculous. Eggs that hens safely laid in the GDR were not bought in stores unless they were labeled "Made in Germany." The leaders of the East German agricultural cooperatives had to negotiate with the western farmers so they would put a stamp on their products saying the eggs were laid in the FRG. Then buyers from the GDR would buy the same eggs. The enchantment was gone pretty quickly. First, capitalism "restored the order". Gone were free kindergartens, layoffs and unemployment started.

In five to ten years, nostalgia for the past emerged. East Germans, especially those who were in their forties, were missing the goods they were used to in their home country because they were associated with a particular lifestyle.