"Listen, I know you're recording, but I personally would like to see them all dead ... I would like to see all Palestinians killed because they are a disease anywhere they go. " -Lieutenant of the Israeli army, Lebanon, June 16, 1982. In memory of one of the most devastating blows to the Palestinian people, various activities are planned. 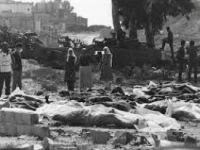 In memory of one of the most devastating blows to the Palestinian people, various activities are planned for the month of September in Sao Paulo, with the aim of rescuing the story of the episode known worldwide as the massacre of Sabra and Shatila. The program will feature an exhibition of photographs and a poetic soiree at the Alceu Amoroso Lima Municipal Library debate, and screening of the film "Waltz with Bashir" by Ariel Forman. in the auditorium of the club Homs, on the 18th of September, besides a collection of articles in the special exercise book on Palestine, from  ZUNÁI - a magazine of poetry and discussions.

Three decades have passed since the episode that is considered one of the bloodiest in recent decades. Even before this crime of enormous proportion, very few actually knew the history of the wars of Lebanon with all the details. Perhaps this is why the scenario of what the Palestinian refugee camps of Sabra and Shatila were has had few effective changes. According to several international correspondents who visited these sites today, about 13,000 refugees live in Shatila, and live with the traumas of the past, surviving with the gift of misery and abandonment.

The change is due to the fact that Sabra is no longer recognized as a refugee camp, becoming one of the most impoverished neighborhoods of Beirut, without recognizing these sites as part of the country. There is no garbage collection nor any public services, which makes the situation of housing and health much more alarming than we can imagine.

The lack of knowledge is mainly due to the fact that there are few traces of the memories of the massacre of Sabra and Shatila. Even before the Israeli boycott at the time, the images still exist in videos and photographs, and can faithfully translate the despair of the survivors before hundreds of bodies stacked and lining the narrow streets and land, surrounded by homes and many simple shacks.

Traumatic memories survive from the evening of September 16, 1982, at the instant that the Palestinian refugees were surprised with the lighting of flares of fire shot into the sky, brightening the night. At that time, the population of the camps could not imagine what would be the first Israeli movements to protect and guarantee the entry of the Phalangist forces (right wing Lebanese Christian militias) into the  refugee camps.

Fear and terror were immediately instilled when many tanks surrounded the entries and exits of the camps. Breaking out from there, Israeli and Phalangist militias began 62 hours of pure violence against Palestinian civilians. It is estimated that this episode caused at least a balance of 3,000 deaths among the mostly elderly, women and children.

Israel had invaded Lebanon in reprisal for the assassination of an Israeli ambassador in London by a Palestinian who supposedly lived in the Shatila camp. Within this same context of the Lebanese civil war, the Israeli army had entered into an agreement with the leaders of the Christian militias to facilitate the invasion of the two camps.

The aggravating factor was finding that some days before the attack, Israel and Palestine had signed a ceasefire, brokered by a U.S. envoy, Philip Habib, which resulted in Palestinian consent for the exit of all members of the Palestine Liberation Organization (PLO) from the Lebanese capital.  This fact reaffirms that the massacred civilian population was left absolutely undefended.

At that moment, the then Defence Minister of Israel had not complied with the agreement and allowed the Phalangists to enter the camps and carry out the massacre. At the same time, the Israeli army had control of the entrances and exits of the  camps. Witnesses reported that many pregnant women and small children were summarily prevented from leaving the camps.

A few days after the massacre and even during the siege in Beirut, the PLO accused Israel of employing tactics similar to those used by Adolf Hitler against the Jews during the Second World War.

Those responsible for the massacre were never punished. Ariel Sharon came to be condemned by the United Nations, but in fact was never penalized. Instead, acting with impunity, he continued his political career in various positions within the Ministry of Israel.

The impunity and injustice are absolutely disclosed in the so-called Kahan Commission report, dated 1983, the document by which journalist Robert Fisk has not failed to classify the massacre as the result "of Israel's wild obsession with terrorism."  In his Poverty of Nations he said: "The Israelis portrayed the document as powerful evidence that its democracy still shines like a beacon on the dictatorships of other states of the Middle East" (FISK, 2001, p. 518).

Despite this finding, parsing the text of the official document, we conclude that it is, above all, a document extremely flawed and biased in its content. Starting with the title of "the events in the refugee camps," rather than qualifying them as a massacre, without even mentioning the word Palestinian.

And speaking of terrorism so repeatedly, the authors of the Kahan report demostrate who had forgotten the basic rule that all invaders of Lebanon should learn: "that by befriending a terrorist group, you also become a terrorist" (FISK , 2001, p. 523). Information is the most effective weapon so that impunity does not prevail and history is never forgotten.

(*) Member of the Working Group on the Middle East and the Muslim World Laboratory of Asian Studies, University of São Paulo (USP-LEA).