In the U.S.A., no candidate will be elected to any office that doesn't answer to the Israeli AIPAC, the insurance lobbies, the military industrial complex and the power elite.

His foreign policy is one of bellicose belligerence.  Even the corporate media regularly refers to him as "unsteady" on foreign policy.  He jumps without thinking.  One cannot be the leader of a nuclear power while one's brain is disengaged before making decisions or statements that can easily be misunderstood.

In his speeches, he said he sees Russia as a major geopolitical adversary of the U.S. The man clearly lacks any experience whatsoever.   His recent international trip overseas where he was supposed to put his foreign policy acumen on display was a complete disaster.

When he was in London, he suggested that the city was not prepared to keep locals safe during the 2012 Summer Olympic Games.

In Israel, he insulted the Palestinians by noticing a  "dramatically stark difference in economic vitality" between Israel and "the areas managed by the Palestinian Authority," and he concluded, "Culture makes all the difference."

Social security privatization, in other words if the stock market crashes, everyone's social security also crashes.  Under Romney, people would have their social security money go into private accounts that could disappear over night.

Medicare...vouchers?  What are people supposed to do with stupid vouchers?

"AARP (American Association for Retired Persons) has opposed proposals to create a 'premium support,' or voucher-style, system for Medicare, a stance that would seem to pit them against the Romney-Ryan ticket on a matter of policy.

In a letter to members of Congress in March, AARP CEO, A. Barry Rand, wrote of the House GOP budget, "By creating a 'premium support' system for future Medicare beneficiaries, the proposal is likely to simply increase costs for beneficiaries while removing Medicare's promise of secure health coverage - a guarantee that future seniors have contributed to through a lifetime of hard work."

The group also opposes a repeal of the Affordable Care Act, a move it says would among other things re-open the prescription drug "doughnut hole" for seniors and lead to higher costs.

"If I am elected president, I will issue on my first day in office an executive order paving the way for waivers from ObamaCare for all 50 states. Subsequently, I will call on Congress to fully repeal ObamaCare.

In essence, the uninsured will continue to be uninsured.  People will die for lack of preventive care as companies and markets rule the roost as usual.

All the years of progress and struggle conducted by labor unions is being undone as more benefits are taken from workers.  Pension plans, heath care benefits, wages and job security are still eroding.  The downward spiral begun by the Bush administration will be sent into overdrive if Romney wins the election.

Romney is part of the rich elite, with little understanding or care for the average, struggling to get by citizen.  His connections with companies and corporations that engaged in job outsourcing cannot be denied.  How he can make claims that he is going to create all kinds of jobs is unfathomable and dubious.

Obama inherited probably the biggest economic mess in the history of the country since the depression.  The economy and job situation certainly needed more than 4 years to show improvement from any measures adopted.

Republicans fail to point out the major reason for the national debt:  foreign wars and troop assignments.  It's not Obamacare, stupid!  It's your wars, your invasions, your weapons that are breaking the backs of taxpayers, we are speaking of trillions and trillions of dollars that Obamacare could never begin to match. 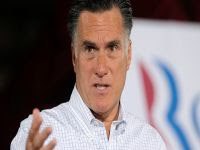