The Portuguese Government has announced that next year, the burden of contributions to Social Security will increase from 11 to 18 percent, an increase of seven per cent per person, in addition to other taxes and soaring, unbearable prices of public utilities. In the equation of Portuguese politics, a PSD government is synonymous with social disruption. 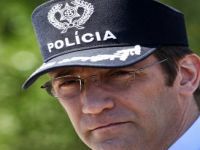 Never in the history of politics has there appeared a man so ill-prepared to govern a country in crisis, never has a team appeared that is so inept or which has implemented such blind, laboratory policies such as the PSD (Social Democrats) government of Prime Minister Pedro Coelho and his illustrious ministers. Already in the nineties, the same party sported a Minister of Finance who was labeled "the mentally advanced one"; for the one that is there today, there are no labels, no words and no patience for him, the Prime Minister and that bunch of charlatans that has dried up the country to breaking point.

In fact, those who think about voting for PSD, CDS/PP or PS should do an MRI scan of their brain because they were the three parties that have governed (?) Portugal since the Carnation Revolution in 1974. So they have no excuse against the charge that they took the country to the situation it is in, sometimes governing alone, sometimes collectively, over nearly four decades.

If they were directors of any company, they would have been fired for incompetence, but because they belong to the class that rules in Portugal, the worst that can happen to them is that they return to where they came from behind the bars of a university or some institute doing Christ alone knows what ... organizing costing 50.000 Euros, maybe. I jest not.

There are situations where the truth must be said, however much it hurts and in Portugal there is a tendency to let things be, to pretend that all is well, and hope that maybe someday there will come a King Sebastian to put everything in order. Sorry, but that will not happen. The laissez-faire died in September 2012. Turn the page, time for a new mentality, a new country.

The Father of this situation was the President himself, Aníbal Silva, who likes to cultivate an air of great wisdom, protecting himself by hiding behind cryptic phrases, fonts of wisdom like "I have a certain vision for Portugal", or "The Progress of the Portuguese people in the European Economic Area".

Aníbal Silva was Prime Minister between 1985 and 1995, precisely in the years after Portugal joined the European Community (later the European Union). Did he or his governments prepare the country for the challenge? No, he spent ten years riding around in motorcades with police motorcycle outriders, giving speeches and playing politics. During those years, rivers of money poured across Portugal's borders, supposedly to be well invested creating the conditions for Portugal to prosper in the Euro club.

Although the country was totally unprepared at the time and in my opinion its accession owed more to the friendship of Mario Soares with "son ami" Mitterrand and although Aníbal Silva in terms of honesty and integrity ranks among the untouchables in Portuguese politics, being honest and looking "serious" is not enough. And the decade of Cavaquism was a stinking, fetid abortion that polluted every sector of Portuguese Government for 30 years.

The money was badly misused, negotiations with the Union saw Portugal's industry, agriculture and fisheries disappear. Losing these industries, how could Portugal be prepared for the challenge? What follows, since the mid-nineties, has been a consequence of this, it is the tail of Cavaquism, a sort of a slimy evil-smelling gunge that covers everything, hiding holes and fooling everyone.

Since the mid nineties, we witnessed a constant slide, witnessed further years of abominable political management by incompetents who have squandered the taxpayers' money, who left Portugal with the worst wages, with prices of food and utilities increasing year after year; no government protected the people when the country entered the Euro (without asking if anyone wanted to), when prices doubled or tripled and the Portuguese have been left with one of the highest tax rates in Europe (for the poor, of course, not the rich).

Now we come to 2012, with a government that anywhere else would belong in a lunatic asylum, that of Pedro Coelho, that implements measures without knowing if they will pass in the Constitutional Court, when even an idiot knows not, and that thinks it has the right to loot the country and rob the people by increasing the Social Security contribution by seven percentage points.

When the plant is sick, you prune it and water it. What this government has done was shut off the water, remove all leaves from the stem and pull up the roots. Now that the plant stubbornly refuses to grow, they stamp on it with hobnailed boots and if it does not die, they will continue stomping it into the ground, like maniacs, until it no longer resists.

With a stubbornness and idiocy like that, it is not surprising that young people are leaving. This time, and differently from previous years, they will not come back. When you take money from the economy, you dry it. The answer is not more taxes - any student of public finance knows that this type of policy produces negative results.

The answer is ... I have my ideas, but it is not up to me here in this Russian newspaper to dictate what Portuguese economists and scholars are paid to do: find a solution. Suffice to say that this does not lie in the three parties mentioned above, as it is more than evident.