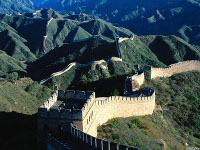 The rapacious and insatiable global US juggernaut is on the prowl again.

Its ambitions and intentions to contain and manage the rise of China could not have been starker!

Leon Panetta has declared US' intent to "shift pivot or re-balance" to the APR by deploying sixty percent of its Naval assets there by 2020 - a major paradigm shift from the GMER/SCAR to the APR - with menacing geopolitical/strategic connotations. While it indicates its geopolitical orientations for the future it also questions its   capabilities to project power simultaneously in multiple theaters of war. The US was generally expected to fight and win at least two-and-a-half Major Regional Conflicts (MRCs) simultaneously - meaning thereby  that the US could fight and win two major and one minor conflict in different theaters of war at the same time. Some analysts now degrade that capability to about one-and-a-half MRC, for a myriad of reasons.

Would this mean that the US does not foresee fighting a major war elsewhere (other than the APR) in the world circa 2020 and beyond?! Is it by choice or a genuine limitation?

The US sees China's emerging economic and military power as a major threat to its global and national aspirations and thus feels compelled to "contain and manage its rise". It has made the preliminary geo-political/strategic moves to maneuver into an advantageous position in the APR. It is reconfirming existing alliances and forging new ones. It can count upon known old allies such as South Korea, Japan, Taiwan, Australia (US troops are to be based in the Northern Territories), Singapore, etc while hoping to co-opt others like the ASEAN, the South Pacific Islands, Philippines, Vietnam, Thailand, Indonesia and ominously India!

India's importance lies in not only keeping the Chinese distracted in the Himalayas but to also let the US and its allies exploit the strategic advantages its military assets and facilities at the Nicobar and Andaman Islands provide. Furthermore, the Indian Peninsula jutting out so prominently into the Indian Ocean allows great strategic oversight on all global East-West trade/SLOCs.

The two major likely areas of conflict in the APR (apart from Taiwan) are the South China Sea and the Malacca Straits. The South China Sea issue is gaining momentum with many regional countries including China laying claims to the Spratly Islands archipelago and its mineral/fossil riches. The Malacca Straits (as opposed to the Lombok, Makassar and Mindoro  Straits and the Sibutu Passage) provide the most economic  Sea Lines of Communications (SLOCs). All countries/economies of the APR thus have a compulsion to keep it open and navigable at all times. And the only Naval Power with the wherewithal to decisively control the Malacca Straits and  other SLOCs - is the US!

Could the South China Sea issue  then become the flashpoint to initiate a war with China to stunt its rapid growth into a global rival of the US? Could the blockade of the SLOCs through the Malacca Straits (and others) be the leverage that could force China to submit to US demands or hegemony?

US' strategic moves do indicate an emerging  crescent of containment around China. It ranges from  Afghanistan in the West to Arunachal Pradesh on the Sino-India border in the Himalayas in the Center and onto the Pacific Ocean in the East where the US' and its allies are present with their formidable militaries.

China is reacting to counter this ominous and blatant attempt to hem it in and circumscribe its strategic space for maneuver. It seeks credible alternatives.

Geopolitically, it must garner succor and support from the Shanghai Cooperation Organization (SCO) which must be expanded immediately to include Pakistan, Iran, Afghanistan and India as full members. Such a move may deter India from joining the US' camp too eagerly! Further an assertive and  proactive  SCO in the SCAR/Af-Pak Region could help nullify pressure on the Chinese western flank to a great extent. Its String of Pearls Strategy is designed to find viable alternatives to the Malacca Straits and to seek a presence in the Indian Ocean. It must translate its proactive interests in Pakistan (Gwadar),   Sri Lanka,  Maldives, Myanmar etc into tangible  counter moves.  It must also launch a massive diplomatic initiative and particularly engage ASEAN, regional countries and India to forestall their joining cause with the US.

Geo-economically, Pakistan is indispensable to the Chinese. Together they could develop the North-South trade corridor linking Xinjiang Province in western China to Pakistani ports on the Arabian Sea. China's presence in Gwadar will bring it  close  to Iran and the Hormuz Straits. An extension of the Iran-Pakistan gas pipeline to China, an oil pipeline running parallel to it and a railway line along the Karakoram Highway (KKH) would provide viable and practical (though partial) alternatives to the SLOCs/Malacca Straits. The Chinese already have an oil pipeline coming in from Kazakhstan into western China.

Geo-strategically, with China sitting at Gwadar/Straits of Hormuz (a strategic vulnerability for the US and her allies) it could  project power and gain an even more  devastating leverage over the US and her allies than they would have at the Malacca Straits! When push comes to shove this would give her a priceless and overwhelming bargaining and negotiating advantage over the US and her hapless allies! A possible China-Pakistan-Iran nexus (SCO-?) could actually be a geopolitical/strategic game-changer in the emerging scenario! Furthermore, Pakistan could keep the bulk of Indian forces tied to its borders and thus obviate meaningful hostilities against China in the Arunachal Pradesh region!

It makes for a great game of chess at the global level.

One only hopes that the US understands the regional and global ramifications of its shenanigans in the APR.