Venezuela was one of the 120 countries from three continents - Latin America, Africa, Asia - sending delegates to the 16th summit meeting of the Non-Aligned Movement (NAM) in Iran, which took place from the 28th to the 31st of August 2012.

The organization was founded in Belgrade in 1961. The founding fathers were the "Big Five": Abdel Gamal Nasser of Egypt, Ahmad Sukarno of Indonesia, Kwame Nkrumah of Ghana, Jawaharlal Nehru of India and Josip Broz Tito of Yugoslavia.

Fidel Castro, another illustrous member, stated in a speech in 1979 that NAM supports "the national independence, sovereignty, territorial integrity and security of non-aligned countries in their struggle against colonialism, imperialism, racism and all forms of aggression, domination or occupation" by foreign states.

The five principles of NAM are mutual respect for each other's territorial integrity and sovereignty; mutual non-aggression; mutual non-interference in domestic affairs; equality and mutual benefit and peaceful co-existence.

These ideals are upheld by all NAM members, including Iran, which has assumed the presidency from 2012 to 2014. Venezuela will be next in line, from 2015 to 2017. The presidency rotates among all NAM member states every three years.

Venezuela's Foreign Minister, Nicolás Maduro, took part in the 16th summit in Teheran, where he was able to talk to his colleagues from Bolivia, Cuba, Dominica and Ecuador.

In his plenum speech, Nicolás Maduro chastised US sanctions against Cuba, which have oppressed this small Caribbean island for more than five decades. In the name of the Bolivarian Government of Venezuela, he further expressed hope for the Caribbean nation of Puerto Rico to free itself from US chains, soon to become independent again. Furthermore, the Venezuelan Foreign Minister said that his country supports Argentina in the question of the Malvinas. The Malvinas are Argentine! High time for the UK to withdraw!

Regarding other areas of conflict, he voiced the same opinion as Iran's President, saying that, "the first lesson the imperialists must learn is to stop interfering in other sovereign nations' affairs."  Nicolás Maduro declared that, "they should stop wherever they are meddling, especially in Syria and Iran."

For the 16th NAM summit in Teheran, large delegations had arrived from Africa: Angola's Secretary of State, Manuel Augusto, said in a press conference that Iran as the president of NAM played a "vital role" in advancing the objectives of the movement. He added that the high turnout at the summit showed the confidence member states have in Iran.  "The main purpose of NAM is the prevalence of peace, justice and equality in the world," Manuel Augusto emphasized.

The Presidents of Gabon and Sudan, Ali Bongo and Omar Al-Bashir, assisted personally, while three other African countries sent their Foreign Ministers: Alhaji Muhammad Mumuni of Ghana, Tieman Coulibaly of Mali and Utoni Nujoma of Namibia. From Somalia, the Deputy Minister for Energy, Abdullahi Dool, was present.

Ghana's Foreign Minister voiced the opinion that, "the 16th NAM summit is a very crucial one, especially in the presence of the world economic dynamics. It is important that developing countries come together. When they act together, they have more power and can build relations."

Zimbabwe was represented by President Robert Mugabe and Foreign Minister Simbarashe Mumbengegwi, who said that "Iran is a very deserving member of NAM because Iran does not fear anybody in the whole world."  He praised Iran for its brave, firm and strategic leadership.

Hina Rabbani Khar from Pakistan judged the guiding principles of NAM to be more important than ever when trying to resolve today's global challenges.  "NAM is clearly a very important organization, and if you look at the guiding principles that NAM espouses, it looks like they are the need of the hour," she pointed out.  "In today's world, the NAM principle of  finding peaceful solutions to conflicts is extremely important," the Pakistani Foreign Minister explained.

Mahmoud Ahmadinejad, the President of Iran, called on all NAM member states to use their potentials and play a decisive role in global management.  "NAM can play a determining role in world relations," he said in his address.  "Through collective cooperation we can have necessary strategies, including a monetary fund, a bank, insurance and independent economic structures. We can also devise new trade methods, including transactions in our own national currencies to provide more suitable conditions for our member nations," he continued.  "All NAM members must participate in efforts to achieve a common global management system which ensures lasting peace based on freedom, justice and human dignity," the Iranian President emphasized.

An interesting definition of what NAM means and stands for was given by the Leader of the Islamic Revolution, Ayatollah Seyyed Ali Khameini, in his inaugural speech at the summit in Teheran.  "Just as Ahmad Sukarno, one of the founders of this movement, said in the famous Bandung Conference, in the year 1956, the basis of establishing the Non-Aligned Movement is not geographical or racial and religious unity, but rather unity of needs. NAM members were and still are in need of a bond that can safeguard them against arrogant, authoritarian, insatiable networks," the Ayatollah said.

This need to bond and safeguard themselves against greedy would-be imperialists is extremely strong today, seen in the light of what happened to the Libyan Great Jamahiriya in 2011 and what is happening to Syria in 2012. The Bolivarian Republic of Venezuela surely feels the threat, just like Iran does. Both countries possess huge oil reserves, which are being eyed greedily by the needy, voracious neo-colonialists.

"Today, after the passage of nearly six decades, the main ideals of NAM remain alive and steady: ideals such as anti-colonialism and independence, cooperation and solidarity among member states," the Leader of the Islamic Revolution pointed out.

Venezuela under President Chávez belongs to those countries that cherish the ideals of anti-colonialism and independence. Hugo Chávez quotes Simón Bolívar, the Father of Latin American independence, ever so often, insisting that Venezuela must remain independent in the future.

"The striking events that we have witnessed over the past three decades clearly show the emergence of new powers. Non-aligned countries can play a significant and worthy role on the world stage to prepare the ground for a just and truly participatory management," the religious Leader of Iran continued.

Socialist Venezuela, with President Chávez at the helm, certainly belongs to these new powers playing a significant and worthy role in the world. The Bolivarian Revolution introduced participatory democracy in Venezuela, basic grassroots democracy with equality for all strata of society. Why should only a few self-chosen "elites" rule a country or the whole world? This seems to be anachronistic in the new millenium which calls for an egalitarian world order.

"The control room of the world should not be managed by the dictatorial will of a few. It should be possible to establish and ensure a participatory system for managing international affairs, one that is global and democratic," the Ayatollah explained.

These prophetic words will resound in the ears of all progressive Latin American nations, first and foremost in Venezuela. What the wise prophet of the Islamic Revolution said is also valid for the Bolivarian Revolution of Hugo  Chávez and PSUV, the United Socialist Party of Venezuela.

"It is anticipated that a new order shall be born. NAM, which includes two-thirds of the world community, will play a major role in shaping that future. By pooling our resources and capacities, we can create a new historic and lasting role toward rescuing the world from insecurities and war," the Iranian visionary said at the end of his enlightening speech.

This is what Venezuela and some other Latin American nations are doing already, pooling their capacities and resources within such alliances as ALBA, CELAC, Mercosur and Unasur, according to the motto, "Together we stand strong."

The participating delegates of NAM in Teheran agreed on 688 articles of a draft statement. The main topics were condemnation of sanctions against Iran and Syria, the demand to end foreign interference in Syria and the need for peace in Syria and Palestine. They called for the creation of a Palestinian state based on the 1967 borders. The full text of the working document can be read on Iran's official NAM website.

Before saying good-bye, Venezuela's Foreign Minister, Nicolás Maduro, invited all of the delegates to Caracas, where the 17th NAM summit will take place in 2015, when Venezuela assumes the presidency for three years. Nicolás Maduro sees NAM as "a movement with a long tradition and important historical patrimony for humanity," a tradition worthwhile to continue.

Hopefully, by 2015, some of the existing problems today will be solved in a peaceful and humanitarian way. 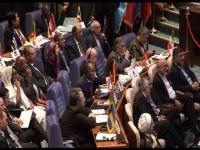