Paul Ryan is known as a right-wing extremist

The social extremism of the vice presidential candidate for the November election, Paul Ryan, makes him an emblematic figure of the most conservative Republican, the New York Times said today.

The country must be nervous by the presence of Ryan on the Republican ticket and his enthusiastic approval by more extremist groups such as the Tea Party, this newspaper published in an editorial.

Ryan is known as the face of radical Republican tendencies for budget cuts, even though his ideology is far deeper and manifests against women's equality in the workplace and as an ardent opponent of abortion rights even in cases of rape, the newspaper adds.

The vice presidential candidate is also one of the candidates in the electoral history of the United States that maintains more recalcitrant positions against the control of firearms, which earned him special recognition from the National Rifle Association.

The paper concludes that the participants in the Republican National Convention (RNC) will officially nominate Republican presidential candidate Mitt Romney in the coming days, but his thinking is close to Ryan, the young man standing beside him and supporting the most radical ideas.

The RNC is being held in Tampa, Florida, until the 30th of August, although the official sessions were delayed due to Tropical Storm Isaac.

Ryan was born in Janesville, Wisconsin on January 29, 1970, to Elizabeth (née Hutter) and Paul Murray Ryan, a lawyer, and was the youngest of four children. His father was of Irish ancestry and his mother of German and English ancestry.

He represents Wisconsin's 1st congressional  district in the U.S. House of Representatives. 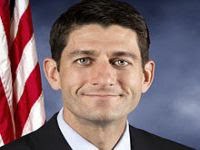 Author`s name Timothy Bancroft-Hinchey
*
15:58
Merkel's remarks about Minsk Agreements were 'petty and disgusting' – Lukashenko
15:02
Viktor Bout says he did not come across Russophobia in US prisons
12:02
Massive fire burns OBI hypermarket at Mega Khimki Shopping Mall to the ground
16:48
US basketball player Brittney Griner exchanged for Russian entrepreneur Viktor Bout
16:31
Zelensky believes Ukraine conflict may end in 2023
20:46
The West is expecting, but not pressing Russia-Ukraine talks
18:27
Putin: The threat of the nuclear war is rising, why deny it
17:17
Ukraine modenises Soviet Tu-141 Strizh drones
15:24
Ukrainian combat drones capable of flying at speed of sound may strike Siberia
14:35
Russian Army continues successful offensive in Krasny Lyman direction
Polish writer shocked to find out Russians will not rise to topple Putin