Egyptian President Mohammed Mursi said he would participate in the summit of the Non-Aligned Movement that opens on August 30 in Tehran. This will be the first visit by a head of Egypt to Iran in over 30 years, and certainly a step towards rapprochement of the two countries. Prior to that Mursi will visit China to meet with Chinese President Hu Jintao.

These events foreshadow geopolitical developments in the Middle East, and not in favor of the U.S. It becomes clear that a representative of the "Muslim Brotherhood" Mursi seeks to act on his own, not only in domestic but also in foreign policy. At first, he showed he was not going to be nice to Israel and redeployed heavy military equipment to Sinai after the incident at the border. Then he proposed to include Iran in the list of the intermediaries in the settlement of the Syrian conflict. Now he accepted the invitation of Mahmoud Ahmadinejad to participate in the forum established in 1961 as an alternative to NATO and the Warsaw Pact. The main purpose of the summit that brings together 120 countries is to show that the U.S. initiative on the political isolation of Iran has failed. 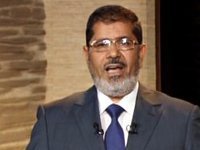 On a regional scale the goal has been achieved. The relations between Cairo and Tehran were severed in 1980, a few months after the victory of Iran's Islamic Revolution and the signing of the peace treaty between Egypt and Israel. After the fall of Hosni Mubarak's regime, Ahmadinejad asked the Egyptian interim military government to allow the passage of Iranian warships through the Suez Canal. The Egyptians agreed. In addition, they stopped delivering gas to Israel at low prices.

With the advent of Mursi some geopolitical changes have emerged. "Egypt is one of the major powers in the region and has a special status in the Arab and Islamic countries ... and we want friendship and brotherhood with it," said Iranian Foreign Minister Ali Akbar Salehi, quoted by the newspaper Al Ahram.

Yet, Washington will not give up on Egypt that easily. The U.S. spends nearly a billion dollars for the provision of military assistance to Egypt, and Riyadh pledged over 2.5 billion dollars to help the Egyptian economy. These financial instruments will be used to influence Mursi, but it seems that he has foreseen everything. He will look for new investments in China during his visit at the end of August at the invitation of President Hu Jintao.

The Chinese money will allow Egypt to "reject loans and aid," said an official representative of the country. China wants to get back the billions lost in Libya and a foothold in the priority rights to pass through the Suez Canal - traditionally they belonged to the United States. This privilege is particularly attractive for China that needs to protect its investment in the Mediterranean and Black Seas. Given the heightened tensions over Iran's nuclear program, all of these three-way steps seem coordinated.

Americans see a threat in the fact that the Chinese in Egypt will have access to their advanced technology. In August 2009, WikiLeaks published an opinion of a U.S. diplomat that Egypt "has more potential violations of Section 3 (Act on the control of arms exports) than any other country in the world." The diplomat expressed particular concern about a visit of the Chinese military to the Egyptian Air Force base that hosts American F-16 fighters.

The power of the "Muslim Brotherhood" in Egypt does not only indicate a clear hostility towards Israel and the alliance with Iran, but also attraction of the Chinese investments, which especially complicates the U.S. position in the Middle East. The praises that the American and Iranian media were singing in unison to the "Arab Spring" and the "Muslim Brotherhood" evoked a thought that one of them was stupid - it is now clear who. This brings the memory of the creation of Osama bin Laden in the wake of the "cold war" with the Soviet Union who later bombed America. Certainly, the U.S. had the expectation that the Sunni Mursi would not agree with Shia Ahmadinejad, but they were wrong here. The idea of ​​reconciliation of all Muslim sects is an idea of Sheikh Hassan al-Banna, the founder of the association "Muslim Brotherhood."

He also argued that the decline of the Islamic world should be blamed on the West. Shiite leader Ayatollah Ali Khamenei, who has translated into Persian the works of the chief ideologist of the "Muslim Brotherhood," Sayyid Qutb, agrees with him. There is mutual sympathy on the practical level as well. "Muslim Brotherhood" admires Iranian militants "Fedayeen of Islam", and after the Second Lebanon War in 2006 previous leadership of "brotherhood" represented by Muhammad Mahdi Akef was openly supporting Iran.

Given that in Syria "Brothers" are rushing into power, one begins to doubt the ability of the U.S. administration to adequately assess the risk. The U.S. betrayed Israel when President Barack Obama agreed to return the borders of Palestine to the 1967 borders, counting on the Sunni states in the region - Saudi Arabia and Qatar. But he, like his predecessors, did not consider that the "East is a delicate matter."