A sea of ​​tensions between China and the United States

The South China Sea seems to gain ground as a source of tensions between the United States and China, which advocates the resolution of territorial disputes in the region between the parties directly involved.

The frequent differences in trade, human rights and other issues between Washington and Beijing are added to the associated theme mentioned before, clearly showing the interests of the U.S. government in the Asia-Pacific are to attempt to contain the spread and growing influence of the Asian giant.

Recent statements of public officials from the White House on steps taken by China on the islands of that sea, found strong reactions in this country, which are described as an apparent attempt at interference in its internal affairs expressed by the other party.

Last month, Beijing established the city of Sansha and a garrison in Yongxing, largest of the Xisha islands, also known as Paracel, which considered normal the adjustment of its administrative and military structure and a subject entirely within its sovereignty.

The reactions of its neighbors with territorial claims in the area were expected. The Philippines said it did not recognize the city and Vietnam referred to the Chinese decision as violating international law.

At the same time, Washington liked these steps, as opposed to diplomatic efforts to resolve differences, while running the risk of an escalation of tensions in the region, according to the State Department spokesman Vendell Patrick, who added that his country was, "following the situation closely."

The United States is aware that territorial disputes constitute one of the major challenges to China in its geographical environment.  A worsening in the area is in their favor.

Nothing strange in recent statements if remembered that in July 2010 the Secretary of State, Hillary Clinton, said her government has a national interest in the South China Sea.

Since then, the actions to prove it have been frequent. as senior civil servants in White House provide assistance by holding meetings to plan a military build-up in the area, including in Australia, to focus on that area.

For national interests, the importance of the sea can be understood for commerce and  trade by the Pentagon, as ships must pass through its waters, where the fishing resources abound, added to the oil and gas reserves known by all neighbors and different territories.

The new chapter of Beijing-Washington tensions on this issue gained strength on day 4 when the Foreign Ministry spokesman, Qin Gang, expressed the firm rejection of his government to that which was expressed by the State Department the previous day.

Earlier, the Senate unanimously adopted a resolution that urges the countries of the area to exercise restraint and refrain from dwelling constantly on various points in the South China Sea until a code of conduct is established.

The document proposes the addition of a commitment "to help Southeast Asian nations to be strong and independent."

From then on, the press commentary and analysis on this country on the topic of abounded and warned that Washington's approach obviously does not lead to a peaceful settlement of disputes, nor to peace and stability in the area.

Another no less important text indicates that with the global crisis, the United States and China must work together to maintain stability in the Asia-Pacific region, which serves as a motor to the fragile global economic recovery.

All that is necessary would be welcome, but the reality is that for China it comes to the question of its sovereignty, which explains the call to the other party to also respect the territorial integrity of this country and contribute more to the peace and prosperity of the region.

It is not yet clear whether that message will be heard, only then could the tensions between these two powers be abated. 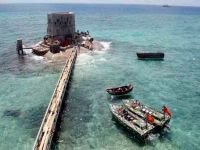