One of the main preoccupations of the Chávez administration is how to reduce the country's dependence on the oil industry. Diversification is necessary, since the oil will surely not last forever, although Venezuela possesses the largest amount of crude oil reserves worldwide.

For the past decade, the socialist government has undertaken great pains to augment Venezuela's agricultural production which has increased by 44% since 1999, reaching 25 million tonnes of food each year, as the Land and Agriculture Minister, Juan Carlos Loyo, reported.

Milk production has shown an increase of 70% since 1999, while the production of beans and corn has doubled. Black beans (caraotas negras) and corn (maíz) are staple food items for the Venezuelan population. Corn flour is the basic ingredient for many dishes, for example the arepa and the empanada.

With the socialist „Coffee Plan" the government gave 1,200 homes to small and medium coffee producers to stimulate coffee production.

Repaired were 7,400 kilometers of agricultural roads.  In 2008, the export of asphalt was halted and priority given to national use for road repair. Furthermore, the construction of irrigation systems and large silos improved Venezuela's rural infrastructure.

In 2008, a new irrigation system was installed in the state of Guárico, transporting water to 32,000 hectares of agricultural land. Additionally, local fishermen can fish in the reservoir that supplies this irrigation system.

In the same year of 2008, Diana Industries, a private oil and margarine producing company, was nationalized. The range of products was broadened to include baby food and soft cheeses. Before 2008, Diana Industries had produced only 27,500 tonnes of soap and food and 1,800 of the employées were contract workers. Today, the production has increased to 90,000 tonnes of soap and food, all of the employées are full time workers.

With the help of Belarus and Iran, several tractor plants were constructed in Venezuela. A factory for soya extraction was built in the state of Portuguesa.

During the past years, President Chávez repeatedly pointed out that his administration was battling hard against food shortages, especially in the supply of milk and meat products.  "We have to raise our national production of meat and milk," Hugo Chávez said in his Sunday TV show "Aló Presidente."

A number of socialist milk-processing plants were built. They are controlled and managed by local communal councils. One of these plants is the Prolesa milk-processing cooperative in the state of Táchira. Local milk farmers sell their milk to Prolesa, where they get fair prices.

One of the founders of Prolesa said that the multinational Nestle left the region after being caught and fined for hoarding in order to keep milk prices artificially high. They poured milk down the drain, while at the same time mothers were unable to buy milk for their children.

This changed in 2004, however, when Prolesa was founded by some cooperative members, with support of the local dairy farmers, and a loan by the government.

To encourage the creation of cooperatives, "Misión Vuelvan Caras" (Mission Turning Faces) was created, offering scholarships to 650,000 participants in agricultural training, specifically for cooperatives. After this measure, agricultural production in cooperatives rose by 18% between 2004 and 2008.

A small but successful cooperative is 3Rs, managed by members of the Jirajara Peasant Movement (MCJ) in the state of Yaracuy. It took its name from the local indigenous Jirajara tribe that fought hard against the Spanish colonialists.

Two socialist vegetable plants have also started to operate successfully. One of them is "Valle de Quibor," in the state of Lara, where tomatoes and peppers are grown. The other one is "Casas de Cultivos Hidropónicos Julian López" in the state of Carabobo. It grows tomatoes.

Iván Gil, Venezuela's Vice Minister of Agroproducts, said that the plant in Carabobo produces 800 tonnes of tomatoes per year without using any chemicals.  "Each hectar develops two yearly cycles, each cycle bringing 100 tonnes," he explained. The tomatoes are sold through Venezuela's socialist government food chain, the "Merca" and "Abastos Bicentenarios" stores.

"Our agricultural production is augmenting," Venezuela's Vice-President, Elías Jaua, emphasized.  "During the first six months of 2012, the production of onions and tomatoes was augmented by 25%, compared to the same time span in 2011. Tomato production increased from 104,000 to 128,000 tonnes, onion production from 80,400 to over 100,000 tonnes," he said.

"This is an enormous effort, which President Chávez has made during the last 13 years in agriculture," Elías Jaua pointed out.  "It is the result of good planning as well as the application of science and modern technology."  He expressed his satisfaction with the results.  "So far, 2012 has been an excellent year for the growth of onions, peppers, potatoes and tomatoes in Venezuela."

All in all, Venezuela nowadays is able to satisfy 80% of its national demand in alimentation.  "We are at present producing about 80% of what Venezuelans consume." Hugo Chávez said with pride at a recent press conference, giving the following list: 100% of fruits, vegetables, fish and pork; 90% of rice; 85% of corn; 80% of chicken and milk; 70% of beef.

"If we have a good harvest at the end of this year, we will be able to supply 100% of our national demand for rice and corn, it depends on the weather," he continued.

Recently, the government has begun to give low-cost credits to farmers. The Venezuelan Agricultural Bank (BAV), worth 340 million Bolivares, offers 20-year-loans to small and medium rural producers. They can open checking accounts and receive credit cards at BAV.

Shares of "Banco Agrícola de Venezuela" worth one Bolivar are sold to the public. The assembly of shareholders assumes the role of defining the bank's rules and financing policies. The bank's motto is "En Revolución Contra la Especulación" (In revolution against speculation).

Other privileged sectors to receive loans are beef, fruit, grain and vegetable production. The bank specifies how the loans are to be used: to finance the purchase of seed, machinery for harvesting and transport and the preparation of land.

Regarding cattle, credits are given for construction and repair of infrastructure, sanitary installments, acquisition of equipment and food for the animals.

In 2012, the average Venezuelan eats much better than during the Fourth Republic, when food prices were horrendous and meat consumption reserved for the rich. During the past decade, poverty in Venezuela has decreased by 60% and consumation of meat has increased.

People can afford better alimentation, because the socialist government has regulated the prices for most food items. Furthermore, the state-owned stores of Mercal offer discount prices. Misión Mercal was introduced in 2004 to tackle rising food prices.

Marilyn Di Luca, executive director of the National Institute for Nutrition, explained that the government initiatives have shown very positive results.  Ninety-seven percent of all Venezuelans consume animal protein and children get their daily drink of fresh milk. "Today, Venezuelans eat better and they eat more," she said in the TV program, "D'Frente," emitted by Venezolana de Televisión (VTV).

Intake of proteins has increased by 75%, about 47 grams of animal protein daily per citizen, according to Marilyn Di Luca. She remembered that, "During the Fourth Republic, our Venezuelan children grew an average of 0.8 cm, compared to 1.8 cm in the Bolivarian Republic. Today, children receive better nutrition and show greater capacity of growth," referring to physical and intellectual growth.

The transition from capitalist to socialist production has not been easy, and is not completed yet, but a great leap forward has been made, inspite of many obstructions, first and foremost through hoarding and speculation.

According to Hugo Chávez, nutrition is one of the areas, where customers are most hurt by capitalistic greed. He wants to end capitalistic "immorality, thievery and trickery."  He warned, "Speculators, you will repent!"

In the past decade, several businesses were expropriated because of excessive speculation, for example four large supermarkets of the multinational chain Exito. Instead, socialist supermarket chains are growing these days, selling food items at regulated prices.

The socialist government-operated areperas offer Venezuela's popular staple food, the arepa, at low cost. The arepa is a tortilla made of corn flour, filled with beans, cheese, eggs, ham or meat. While privately owned areperas sell the arepa for about 40 Bolivares, the socialist arepa only costs 8 Bolivares.  This sum covers the total production costs.

Another private firm which was expropriated is Llano Arroz S.A. The rice threshing and packaging plant was nationalized because it did not pay its major debts to the socialist supermarket chain of Mercal stores.

Moreover, eight small private banks were nationalized at the end of 2010, and merged into a public investment bank, named Bicentenary Bank.

INDEPABIS, the Venezuelan consumer defense institute, is watching closely over private businesses, taking immediate measures when speculation or hoarding are detected. They send the National Guard in, but also local squadrons of the United Socialist Party of Venezuela (PSUV), of the Socialist Women's Front and of labor unions.

INDEPABIS also encouraged the formation of food security committees in communities, to engage them directly in the monitoring process of their local businesses and shops. They get a phone number where to call when they detect hoarding or speculating activities.

The catalogue of measures consists of fines, prison sentences and expropriation, depending on the severity of the crime. Most of the incidents were combatted successfully by fining, emprisoning or expropriating such fraudulent business owners who dared hoarding goods in order to sell them at inflated prices in the black market or in neighboring Colombia.

The legal definition for this type of delinquency, according to INDEPABIS, is "to create irregular situations in the stores by artificially modifying the conditions of demand."

In July 2011, President Chávez introduced the Law for Just Prices and Costs."  It is a legal price control mechanism for "the defense of economic rights of people to access good and services."  The price-setting law is framed within the Constitution. It promotes democratic access to goods for everybody.

With this law, the "National Integrated System for the Administration of Prices" was set up. It inspects and supervises prices charged to consumers. Vice-President Elías Jaua commented that "The law stabilizes prices, it is a law of labor against capital, a law of the rights of workers to obtain good and fair prices."

President Chávez pointed out that this law is aimed against all those who "monopolize production, hoard and hide products, inflate prices and take the big slice of earnings with them as a result of their pillage."

After the introduction oft the "Law of Fair Costs and Prices," Venezuelan companies started to register their pricing structures with the government's automated price system (Sisap). Prices for household cleaning and bathroom products were frozen, with 480 official inspectors visiting stores all over Venezuela to ensure that local businesses comply.

Since the 15th of January 2012, companies have been obliged to print the prices of regulated items on product labels so that customers can make sure they are paying the right price.

The socialist orientation of President Chávez and his administration prioritizes food production in small units and cooperatives to cover 100% of domestic needs. His aim is that in a few years Venezuela will reach "food sovereignty."

Article 305 of the Constitution states that food security can only be achieved through "developing and privileging internal agricultural production."

Surplus production of cacao, coffee, tropical fruits and flowers is exported to Venezuela's strategic partners in Belarus, China, Iran and Russia as part of the effort to build a pluri-polar world. 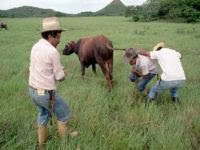