Uribe the joke of South America

According to the former Colombian president, a territorial violation similar to the one held in Ecuador was entertained...

The statement was given in a lecture at Unaula (Autonomous University Latin American) in Medellín, Colombia. "We have obtained new evidence of guerrilla camps in Venezuela. I had three options: make a complaint, be silent or start a military operation in Venezuela. "I lacked time," he said to the bursts of laughter.

On 1 March 2008, Colombia invaded Ecuadorian territory and attacked a FARC camp, killing a guerrilla leader, Raúl Reyes. The operation was done without permission of Quito, which caused the rupture of diplomatic relations between the two countries.

"It is not possible to attach importance to the statements of Uribe," answered Venezuelan deputy of the Parlatino (Latin American Parliament), Roy Daza. He points out that the Colombian is not even a member of the government and is on a campaign trail to return to the presidency. In 2010, Uribe tried to ensure the mechanism of indefinite reelection in Colombia, but successive judicial decisions frustrated the former president.

"He is a person who does not have minimum requirements to be head of state. The former president Uribe seeks to disrupt relations between Venezuela and Colombia, between President [Juan Manuel] Santos and [Hugo] Chavez. Our relationship is one of cooperation, and a friendship that is developing in terms of diplomacy, despite the differences we may have ideologically, but a mutual respect," said the deputy.

The current Colombian President, Juan Manuel Santos, became president in 2010, after being defense minister (2006-2009). But early on in the government, the former president cast doubt on the government, criticizing the appointments of ministers' nominations and calling Santos a "hypocrite." His arguments are broken down, as Uribe has submitted his name as a pre-candidate. 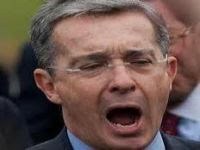