South Africa mine shooting: What is going on?

Over one hundred victims - 34 dead and 78 injured - is the result of a lethal confrontation on Thursday afternoon between striking miners and the police force in Marikana Mine, North-West Province in the north of South Africa, around 100 kilometres northwest of Johannesburg. As investigations ensue amid conflicting versions of events, what happened? 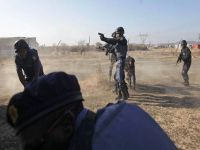 Friday August 10, 2012: around three thousand workers launched a walk-out over a dispute on pay. The management of the strike called the action illegal. Stories emerge of in-fighting between two Unions in South Africa, namely the National Union of Mineworkers (NUM) and the Association of Mineworkers and Construction Union (AMCU), described by some sectors as "more radical", have emerged at another mine this year.

On Saturday 11, it is claimed that some mineworkers who wanted to go to work were attacked, the violence escalated throughout Saturday (with a lot of beer involved in the traditional weekend drunken rampage) and Sunday saw a security car set ablaze and two guards killed. On Monday, two workers were murdered by the strikers and an attack on the police left two officers dead.

On Monday also, the police opened fire on the protesters killing three strikers, the violence escalated over the next days with six more killings before the explosion on Thursday when things got out of hand.

For the police, the primary incident was one of self-defence - yet one which produced 34 dead, 78 injured and 259 arrested, according to National Police Commissioner Riah Phiyega, who added that "The police members had to employ force to protect themselves from the charging group". The police have stated that the strikers were armed with weapons - mainly machetes and sticks and some with firearms - and did not obey when told to disperse.

Police nonchalance, disrespecting human life, stepping over corpses when a ferocious attack had been launched against largely unarmed miners using tear gas, stun grenades, water cannon, then when the miners failed to comply with orders to hand over their tools and weapons, terminating in a shooting incident.

Forensic teams and police investigators are launching a study into the incidents, as the violence seems to have subsided.