On Thursday, Persian Minister of Foreign Affairs, Ali Akbar Salehi, described as unfair the suspension of the membership of Syria in the Organization of Islamic Cooperation (OIC), which was decided at the emergency meeting of that organization, held this Wednesday city ​​of Mecca, Saudi Arabia.

"Iran has disagreed with the suspension of Syria's membership in the OIC.  It was discussed at a meeting in Mecca, because it contradicts the Charter of this organization," Iranian Foreign Minister concluded a few minutes before he left the city of Mecca bound for Tehran, the capital of Iran.

In this regard, and referring to this hasty decision, the Persian authority argued that Syria should be invited to present their defense, and that participants should know the official positions of Damascus.

In his view, it makes sense to invite Syria to address discrepancies in order to find a solution to the political turmoil that has afflicted the Syrian nation.

Syria ceased to be a member of the Organization of Islamic Cooperation (OIC) after a special two day meeting of the leaders that ended Wednesday in Mecca, Saudi Arabia.

The ruling was announced in the absence of a Syrian government representative at the meeting.

The decision expressed in the final communiqué of the meeting in Saudi Arabia was adopted to stop the alleged violence against the population, attributed to the government of Syria.

Nevertheless, it was not a unanimous desire, as some countries, such as Iran and Algeria, have expressed opposition to the suspension of the Syrian nation from the OIC.

The ninth meeting of two days of the Islamic Cooperation Organization ended Wednesday night in the city of Mecca, Saudi Arabia.

The purpose of this emergency meeting, proposed by Saudi King Abdollah bin Abdelaziz Al Saud, has been to deal with the most important events concerning the region, and issues concerning the Islamic world, as is the case of Syria, Palestine, Baréin and the Muslims in Myanmar (Burma).

The United States, as a primary source of agitation, propaganda, funding and weapons to terrorists in Syria, was overjoyed with the decision.   State Department spokeswoman, Victoria Nuland, said the OIC decision sends a "strong message" to Syrian President Bashar al-Assad's government.

It's a shame that the OIC failed to condemn terrorists and their supporters, who in reality are the cause of the deaths, violence and destruction in Syria.

The suspension comes as the United Nations Security Council plans to hold a session to discuss the situation in Syria.  The mandate for the U.N. observer mission in the country expires Sunday. 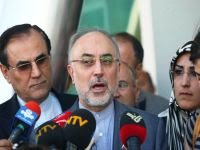