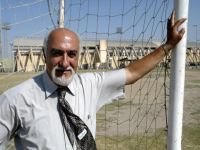 As the triumphalism and self-congratulatory lauding of the Olympics "putting the 'Great' back into Britain" as one government Minister modestly put it, temporarily winds down until the start of the Paralympics, on the 20th of August, for one woman the event has been one of heartbreak and searing heartache.

Niran Al Samarrai is the wife of the former Chairman of the Iraqi Olympic Association, Ahmed Al Samarrai, who was kidnapped at a major conference at the Oil Cultural Centre in the centre of Baghdad, with thirty-six of his colleagues on the 15th of July 2006. Twelve were released after ten days, exhibiting signs of torture. The others, including Mr Al Samarrai, have disappeared without trace.

The Cultural Centre is situated in the fortified well protected "Green Zone" (now the "International Centre") near to the Ministry of the Interior - where in November 2005 US troops found more than one hundred and sixty whipped, beaten and starved prisoners, mostly Sunni. The Ministry was alleged to have been under the direct control of the highly sectarian Shia Prime Minister, Nuri Al Maliki, under whom Shiite death squads were rampant and multiplying.

On the day of the kidnapping, Mr. Al Samarrai had just finished addressing five hundred guests of the National Olympic Committee of Iraq, alleging a plot against the Committee, naming names, when more than sixty gun men in police uniforms stormed the meeting, having shot dead security men who tried to stop them. The area was "besieged" by modern police vehicles, says Mrs. Al Samarrai.

The Olympic Committee and others were forcibly "arrested" by the armed "police" and bundled in to a "fleet of police cars" seen driving away in the direction of the Shiia enclave of Al Sadr city, named after the invasion for the largely Iranian-based cleric Muqtada Al Sadr.

Incredibly, in September 2006, Iraq's Minister of Youth and Sport, Jassim Mohammed Jaafer, in an interview with Al-Riyadhi Al-Jadeed (the 5th of September 2006, Issue 420) stated that the abductors were from within the sports fraternity and he understood their grievances, indicating that the government was aware of who was responsible. Noteworthy is that Mr. Al Samarrai, who had also been target of an ambush attempt in Athens, in 2004, had "done his utmost to persuade the Minister or his advisors to attend the Conference." They had refused.

It must be noted that the election of Mr. Al Samarrai and his colleagues to the Olympic Committee was organised with help from the International Olympic Committee, the above Ministry of Youth and Sport, other parliamentarians, with numerous monitors and media, international and local, IOC Members and Members of the Coalition Provisional Authority present.

Poignantly, the name Samarrai, of course, indicates that his roots are in Samarra, where the great golden domed mosque was blown up in February 2006, five months before the kidnappings.

Those taken with this man of ancient, beautiful Samarra, included:

Since the abductions, Niran Al Samarrai has fought a relentless battle for answers. Inspite of the fact that she is a British citizen, and her husband defected from Iraq and lived in the UK from 1983 - until returning to Iraq after the overthrow of Saddam Hussein's government - even Chairing London's Swiss Cottage Islamic Association, and with Degrees in Physical Educational Training from Baghdad, Leipzig and the British Military Academy, she has met with a wall of silence and obfuscation.

In 2008, she met with the President of the International Olympic Association, Jaques Rogge, who promised all assistance. Nothing has happened.

With the President in London for the Olympics and Paralympics, she has again appealed to him for help, for the man she calls, "The star from Samarra," in an open letter:

It has been six years and we have still not found the fate of my kidnapped husband, the President of the NOCI, Ahmed Al-Samarrai, and his 24 colleagues, as the Iraqi government has remained silent all these years.

In our meeting with you last, 2008, you assured us that the IOC will do its utmost to pressurize the Iraqi government to tell us the fate of our men, but instead the IOC stood by the Iraqi government who announced your support prior to Beijing Games. The Beijing Games then passed without any word at all from your side regarding the savage crime which attacked the NOCI, and the lack of investigation by the Iraqi authorities.

I attach a copy of a letter sent to you by my son, Osama, to which we have not received any reply unfortunately.

I believe the Olympic Family should show some sincerity to a man who is a member in one of its National Olympic Committees, and Member of Sport for All, and who served the Olympic Charter strongly in the face of the sectarian pressure he suffered from continuously, as you are well aware. The International Olympic Committee should make a stand during the London Games, and demand the result of any governmental investigation from the Iraqi government in Baghdad.

As you know, we believe the government itself was responsible for that crime (we gave you the evidences, Sir) and then kept its silence and failed to conduct any proper investigation. Indeed, they didn't bother even to meet those few who were released within 10 days of the abduction. We had asked you yourself to meet them in order to see the torture marks on their bodies, but sadly we received no response from your side.

The London Games are underway, and being a British citizen who lost her husband while he was on duty for the Olympic Family, I hope that this chance will not also be wasted (similar to Beijing games).  I am formally requesting please that the International Olympic Committee should ask the Iraqi delegation officially about the case, and to request that the results of an official investigation be made public.

I believe the recently established NOCI which replaced Ahmed and his colleagues should also bear responsibility for ignoring the crime and not demanding any investigations. They are also responsible for holding the salaries of the kidnapped, which left their families starving, although I believe they are entitled to receive salaries until the Beijing Games and the proper election of a new NOCI in 2009.

My book about the crime "A Homeland Kidnapped," was published in Arabic last year and the English version has been published in London recently.

The Olympic Family, as well as the media, will receive copies from me. I hope it will serve as a reminder of the crime and the negative reaction towards it, in particular the failure to act of those who could have done more.

The 15th of July 2012, was the sixth anniversary of the kidnapping.  We are counting on your help, Sir, in the spirit of the Olympic Values and out of humanitarian concern, to help all the families of those abducted to reach closure after six awful years of suffering. The London Games are a chance for any person with conscience to raise their voice and use their influence to bring about a resolution to this crime that hit the Olympic Family.

I look forward to hearing from you.