Hiroshima and Nagasaki: Worst massacre in the history of Mankind

On Monday (06th), a tribute was held to the victims of the atomic bomb dropped by the United States in 1945 on the city of Hiroshima.  The city's mayor, Kazumi Matsui, called again to eliminate nuclear weapons.

Tens of thousands of people attended this memorial, which also reiterated the request for more aid for survivors of this tragedy, facing health problems caused by radiation from the mentioned war artifact.

When reading the Declaration of Peace during this annual ceremony, Matsui assured: "We promise to convey the experiences and desires of our Hibakushas (people affected by the bombs) and do what lies in our power to achieve real peace of a world without nuclear weapons."

A second such attack on the city of Nagasaki three days later caused over 70,000 deaths.

The tribute was held at Hiroshima Peace Memorial Park, attended by survivors of the tragedy, relatives of victims, Prime Minister Yoshihiko Noda and diplomats, among others.

The memorial took place in the middle of a great debate about the use of nuclear energy in the country after the disaster in central Fukushima caused by the earthquake and tsunami of March of last year.

Since then, a greater force in this archipelago rejects this source of electricity generation, appreciable in the frequent demonstrations in which the closure of these types of facilities is demanded. 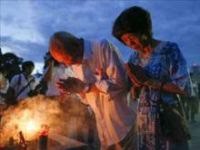