China expresses its strong dissatisfaction and resolute opposition to the press release issued last Friday (3rd) by the U.S. State Department over the South China Sea, said the spokesman of the Ministry of Foreign Affairs, Qin Gang, on Saturday (4th).

The United States confirmed they would monitor the area to "to avoid an abusive imposition of power by China towards other countries."  Besides China itself, the Sea bathes most of Southeast Asia. This question is one of the major diplomatic tensions between Beijing and Washington.

The statement "completely ignores the facts, deliberately confusing right and wrong, and sent a very wrong signal, which is not conducive to efforts to safeguard peace and stability in the South China Sea and the Asia-Pacific," said Qin .

The spokesman adds that China has indisputable sovereignty over the Nansha Islands and their adjacent waters. In his statement, Qin says that China has established offices in the Xisha, Nansha and Zhongsha Islands, pertaining to the province of Guangdong in 1959, to administer the three islands and their adjacent waters. "It is necessary to point out" - the statement of the Chinese Foreign Ministry said - "that China and the countries of the region have worked to maintain peace and stability in the South China Sea, and safeguard freedom of navigation and commerce in the last 20 years."

According to the statement of 2002, China and the countries of the Association of Southeast Asian Nations (ASEAN) signed the Declaration on the Conduct of Parties in the Sea, which states that the sovereign states directly concerned should resolve their territorial and jurisdictional disputes by peaceful means and through friendly consultations and negotiations, and there should not be any movements that lead to the worsening of disputes.

The United States expressed on last Friday concerns about the growing tensions in the South China Sea, and criticized the establishment of a Chinese garrison in the city (island) of Sansha.

The spokesman for the Chinese foreign ministry, meanwhile, questions: "Why does the USA pull the wool over their eyes at the fact that certain countries opened a series of oil and gas blocks and passed national laws to appropriate the islands and the waters?

Why did the U.S. avoid talking about the threat of warships of certain countries to Chinese fishermen and unjustified claims about the rights of Chinese sovereignty over the islands? And why did the U.S. suddenly decide to express their concerns and interfere with the issue at a time when countries in the region are improving communication and dialogue and trying to resolve conflicts and defuse the situation? "

The Chinese Foreign Ministry statement concludes by stating that the Asia-Pacific region is a relatively stable economy in the world, an important engine for global economic recovery and that the U.S. should follow the trend of the times, respect the common aspirations of the countries of the region to maintain peace and stability and promote development, respect China's sovereignty and territorial integrity and give more contributions to peace and prosperity in the Asia-Pacific.

Qin stressed that China and the ASEAN countries have established the largest free trade area among developing countries since they began a dialogue for over 20 years.

China and the ASEAN countries have together faced the challenges of Asian the economic and financial crisis, the worldwide financial crisis, as well as natural disasters, and have made progress in cooperation in all areas. According to Qin, China attaches great importance to friendly cooperation with ASEAN, supports the ASEAN integration process and the important role of the block on cooperation in East Asia, noting that China is ready to work with ASEAN countries to eliminate disorders and promote the development of bilateral strategic partnership.

In the summit last month, ASEAN (Association of Southeast Asian Nations) has discussed the issue, and there was no consensus to resolve the issues of sovereignty in at least six points of the South China Sea.

The South China Sea has an annual trade of about U.S. $5 trillion and represents one of the most intense areas of maritime transport in the world.

With information from the China Daily and international agencies 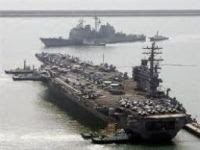