Venezuela's incorporation into Mercosur to generate over 240,000 jobs 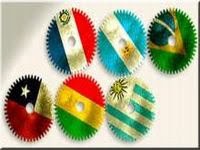 Venezuelan President Hugo Chavez is already on his way to Brasilia. Before leaving Caracas, in the early afternoon of Monday (30th), he gave a long press conference. Chavez said that the incorporation of Venezuela into Mecosul puts the country on "the right historical perspective." Filled with enthusiasm, the on Tuesday (31st), in Brasilia, on the official entry of Venezuela, Chavez said that the merger will generate 240,000 jobs. According to him, by December there will be a fund of $500 million for loans to public and private companies in Venezuela, which will stimulate production.

At the airport in Caracas, the Venezuelan president invited businessmen to participate in the presidential commission on the country entering Mercosur. The group is formed by the Ministers Nicolás Maduro, Foreign Affairs, Rafael Ramirez, Petroleum and Mining, Ricardo Melendez, Industry, Jorge Arreaza, Science, Technology and Innovation and Edmée Betancourt, Trade.

* With information from VTV, state television in Venezuela