Obama and Romney fight for US Jews

At the end of last week, U.S. President Barack Obama and his main rival in the presidential race, Republican Mitt Romney, were at the center of media attention because of Romney's visit to Israel on July 28-30. In its course, he wanted to show the differences between the policies of the Republicans and Democrats in the region, while Obama promised Israel 70 million for missile defense.

Prime Minister Benjamin Netanyahu was one of the first to welcome the American politician in the country. He talked a lot about the possible convergence of the two countries in addressing the Middle East settlement. 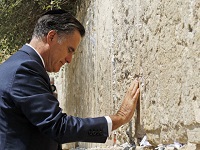 It is worth noting that Romney did not hesitate to make a number of compelling statements that have already caused a mixed reaction both in Israel and the Palestinian Authority. In his two-day stay in the country Mitt Romney held a formal meeting with Prime Minister Binyamin Netanyahu and head of the opposition party Kadima Shaul Mofaz. He also visited the Western Wall and left a traditional note with a request to God.

Republican speeches were traditionally anti-Iranian. Back on July 12, two weeks before Romney's arrival in Jerusalem, the newspaper Maariv called Mitt Romney a novice in foreign policy who will have a hard time competing with the highly experienced Barack Obama. According to an observer Ben Thane, it will be difficult for Romney to demonstrate his fundamental difference from Obama in this area. In Iraq, Iran, Pakistan and Afghanistan Obama has a tough policy that the Republicans have to agree with. Criticism of Obama on the issue of relations with Israel and the stalemate in the Middle East arena allows Romney to look "like a President" during the scheduled meetings in Jerusalem and Ramallah, said news agency Cursor referring to the newspaper Maariv.

Israeli journalists were correct in their assumptions: the American politician not only criticized the current President of the country, but expressed his determination to prevent the spread of a nuclear threat from Iran. The current President was harshly criticized by the Republican candidate. Romney also said that Israel deserved better treatment than the one it received from the presidential administration during the reign of the Democrats. Romney said to channel ITV 7 that Israel was the true friend and ally of the US who shared common values. He added that the Israelis did not deserve the public flogging in the UN under the applause of hostile states that have honored President Barack Obama as if Israel is the source of all evils in the region. He promised it would  not happen with him as the President.

What is fundamentally different in the positions of Barack Obama and Mitt Romney, seeking to win the sympathies of the Jewish community before the U.S. presidential election? It is obvious that Obama and his opponent are in favor of strong pressure on Tehran in order to force the regime of the ayatollahs to curtail its nuclear program. However, their approaches to resolving the Palestinian-Israeli conflict differ.

Obama in March of 2012 in a speech to the influential pro-Israel organization American-Israel Public Affairs Committee did not rule out the use of force against Iran to prevent that country from acquiring nuclear weapons. However, even the "American hawks" now understand that application of an unprovoked attack on Iran's nuclear power plants is fraught with unpredictable consequences for the entire Middle East.

The Republicans accused the Democratic President of leaving Israel to fate. However, we cannot say that Tel Aviv was lacking in American military aid. Back in March of 2009 Obama confirmed his commitment to the implementation of the U.S. obligations to transfer its ally $30 billion for military purposes. Most of the funds will be used to purchase U.S. military equipment. The Netanyahu government over the years has paid particular attention to the safety of the cities in the south subject to constant shelling by "Kasammami" and "Grad". The Pentagon has allocated to Israel over 200 million dollars in 2011 for the deployment of a missile defense system "Iron Dome". Later, when Obama did not rule out the possibility of partial reduction of aid to Tel Aviv, Republicans sharply criticized the president.

However, on July 27, the day before Mitt Romney's arrival in Jerusalem, Barack Obama made a move that should negate all the efforts of his political opponent. The President during the signing ceremony of the law to strengthen the cooperation between the countries in the field of security announced the U.S. intention to provide the Israelis $70 million for the development of missile defense.

Most analysts agree that both U.S. presidential candidates are fighting for the votes of the influential Jewish community in America. This is why the "Israel vector" of foreign policy is one of the most important for Obama and his opponent Romney.

However, the position of the current American president in the settlement of the Arab-Israeli conflict does not suit many people - both in Israel and in America. Today, many Israelis and Jews in the United States do not conceal their indignation over the recent statements by Barack Obama, who reiterated his commitment to Israel's return to 1967 borders. Now the "right" are more likely to support Romney who has already announced that he recognized Jerusalem as united and undivided capital of Eretz Yisrael.

However, Israeli Prime Minister Benjamin Netanyahu in the current situation remains extremely diplomatic. Regardless of who comes to power in the U.S. after winning the November presidential elections, Israel would be interested in strengthening bilateral ties between the countries.