Syrian President Bashar al-Assad, announced yesterday (26th) the establishment of an Anti-Terrorism Court, based in Damascus, capital of the country. According to local media, the court will be responsible for adjudicating cases related to terrorist actions and the implementation of the conviction and sentence given at trial.

The Syrian crisis has dragged on for 17 months, with constant situations of violence and bloody conflicts. Damascus and Halab, in the north, have recently been the scene of clashes between government forces and armed groups of terrorists supported by the west and some Arab countries.

A spokesman for the White House, Victoria Nuland, announced yesterday at a routine conference that the United States is not planning a military interference in the country, but will continue giving support to terrorist groups, providing communications equipment and medications to help them achieve political transition.

On the same day, the Lebanese foreign minister, Adnan Mansour, pointed out that external military intervention would complicate the situation in Syria.

Regarding the proposal by the Arab League on the establishment of "safe areas" in the country, the Russian Foreign Minister Sergei Lavrov said in Moscow that the mission is impossible while some countries continue to offer assistance to the opposition. 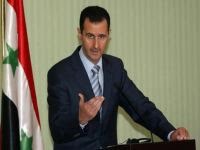