Russia and USA to fight for India's defense billions

The Indian Ministry of Finance allocated 1.93 trillion rupees ($40 billion U.S. dollars) for the country's defense budget for 2012-2013 fiscal year. In comparison with the 2011-2012 fiscal year, India's military budget has increased by 17 percent. This is the money that arms-exporting countries, including Russia, will have to fight for.

Approximately $17 billion in the new defense budget of India is allocated for the purchase of arms and military equipment. Of these, 70 percent are the already signed contracts. In 2007-2011, India imported military goods for $12.65 billion dollars, of which $10.6 billion were Russian supplies. 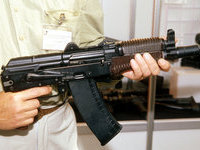 According to a recently released report by Stockholm International Peace Research Institute (SIPRI), India was the world's largest importer of weapons from 2007 to 2011. It accounts for 10 percent of the global arms purchases. This is a very attractive morsel for the countries that sell arms.

Russia has traditionally been the largest supplier of arms and military equipment in India. The country occupies a leading position in the overall volume of the Russian arms exports, and its share is no less than 30 percent of the total market. The volume of orders for Russian weapons deployed by the Ministry of Defense of India is currently at approximately $10.8 billion dollars. However, the traditional rivals of Russia are carefully eyeing India's desire to arm.

The main arms dealer in the world is the United States. The share of exports of U.S. weapons in the global market is 30 percent. Russia is kept steadily in the second place with 24 percent, followed by Germany (9 percent), France (8 percent) and Britain (4 percent).

The Russian defense industry in recent years has been reinforcing its position. According to the analysis of the arms market for 2005-2009, Russia provided 23 percent of the global arms exports. However, compared to the period between 2000-2004, there is a noticeable reduction of the Russian share of the market. At the time it was 31 percent and even 1 percent higher than that of the Americans.

The global arms market has long been formed. The Indian market, however, is something to fight for, and both the U.S. and Russia are very interested in it. In addition, India is constantly increasing its armament. Many experts believe that the missile defense segment a will be the next place of fight for the orders from India. This segment is mainly unoccupied at the moment and has not yet been fully covered by the established relations.

The fight for the Indian arms market is already underway. It is an open secret that the U.S. State Department is trying to weaken Russia's position on the arms market in every major country, including India. The competition here is of geopolitical nature.

Incidentally, the recent revolutionary events in Arab countries may be another reason for the U.S. to fight for the Indian weapons market. The power in these countries is changing and it is still unclear what weapons the new rulers will be buying - American or Russian.

For example, Russia had been arming Libya for many years. As a result of a military coup in 2011, total losses of the Russian military-technical cooperation, according to Rosoboronexport, accounted for a huge amount - $4 billion. A year earlier, Russia had to break a lucrative contract to sell arms to Iran in connection with the introduction of the UN Security Council sanctions. This is precisely why the stable Indian market is so attractive to Russia.

In 2011, U.S. defense companies have made export transactions for $34.8 billion dollars. For comparison, last year Russia sold armaments and military equipment abroad for $13.2 billion dollars - $1.9 billion above the planned level.

In 2012 Russia plans to sell arms and military equipment for $13.5 billion dollars, as stated by Mikhail Dmitriev, the director of the Russian Federal Service for Military-Technical Cooperation. According to him, to date the portfolio of arms orders is over $40 billion.

The Pentagon is predicting a record year for the U.S. exports of arms. The volume of the U.S. arms exports in 2012 fiscal year ending September 30 could reach a record $60 billion. Experts believe that the main economic battle is yet to come. The Indian market is at stake, and the U.S. will have to fight with Russia for it.