Kim Jong-un is about to finish his rise to the political Olympus of North Korea. Big changes take place in the administration of the Democratic People's Republic of Korea. The chief of staff was dismissed from his position, and then a new Vice Marshal appeared, a favorite of Kim Jr. Finally, Kim Jong-un was awarded with the title of the Marshal, the Commander-in-Chief of the Korean Army, one of the largest armies in the world. 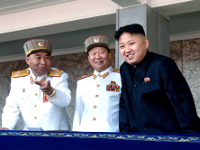 Kim Jong-un now chairs the Workers' Party of Korea (WPK), the Central Military Committee and the Defense Committee that used to be chaired by his late father - Kim Jong-il. The latter was posthumously awarded with the title of generalissimo last February.

The recent resignations and appointments of senior military officials suggest that the young Korean leader wants to introduce his loyal people for the army administration and avoid comparisons with his father.

The second most important figure in North Korea, the Head of the Joint Chiefs of Staff, Lee Yong-Ho, was dismissed from all his posts on Sunday "for health reasons." However, it is unlikely the real reason for the dismissal. As recently as in May, the "youngest" member of the Political Bureau of the WPK (he is aged 69), being in perfect health, led a delegation of the DPRK in Laos. In June, he appeared on central television of the republic. In addition, the official statement about his resignation did not contain traditional words of gratitude "for his long service," which is fraught with the "loss of face" - the worst of all losses, which a Korean leader can only encounter.

However, a figure of this scale can not disappear without explanation, not even in North Korea. One does not have to look for the cause. Lee was sharing his posts at the party and at the defense committee with the young leader of North Korea. Lee was helping Kim Jong-un at first, but then it was time to remove the influential figure from the chessboard.

The next day, according to the official Central News Agency of Korea, the country had a new Vice-Marshal. The title was awarded to General Chen Yong Chol, who, as South Korean analysts assume, may become Lee's successor. There is not much information about him. He became a general in September 2010. Chen comes from a family of supporters of his grandfather, Kim Il Sung, who fought against Japanese invaders. He received a very high rank in North Korea, and was supposed to obtain an adequate position too. Other vice-marshals are Choe Ryong Hae (the main "Commissar" of the Korean Army), Kim Jong Gak (the Minister for the Armed Forces), and Kim Yong Chun (the Vice Chairman of Defense).

Hyun is a member of the Central Committee of the Korean Workers' Party, but he is not a member of the Central Defense Committee.  Therefore, his appointment raised eyebrows in Seoul. South Korean media treats the ongoing reshuffle as a sign of the North moving in the direction of reforms and openness. No actual evidence of this hypothesis has been received yet. However, South Korean President Lee Myung-bak held a meeting on national security on Wednesday morning. The meeting was devoted to the situation in North Korea.

The two countries have been technically at war since the middle of the last century. The two Koreas have never signed the peace treaty after the actual completion of the conflict. "This is actually a positive factor for Seoul," said Wai Ho Leong, a senior regional economist at Barclays Capital in Singapore. "Speculations of the followers of the tough course have not materialized. Kim Jong-un rules the country, and it pacifies the markets."

It looks like Kim Jong-un has begun to change his country - timidly, but firmly. He studied in Switzerland, and he understands it perfectly that the country can no longer live in poverty and isolation. Kim, Jr. began to make public statements for his people; his style of administration is much more dynamic.

He ordered the media to cover his visit to a theme park, where he criticized the park administration for mismanagement. "Americans" such as Mickey Mouse and Winnie the Pooh appeared at a concert in his honor.

North Korea is isolated from the majority of world markets due to the sanctions in connection with its nuclear program. The income per capita in North Korea, according to the Central Bank of South Korea, last year made up 1.33 million wons ($1,160 dollars). The citizens of South Korea, by contrast, earn about 25 million wons.

North Korea depends on China, its largest trade partner that supplies energy and food. Western analysts do not expect real reforms from the new Kim. Indeed, the Juche idea, according to which all issues of domestic life have to be solved single-handedly, does not accept instructions from anyone, especially in terms of the nuclear program - the only deterrent in today's world. However, Kim Jong-un may successfully adopt real economic transformations on the Chinese model. Needless to say that China continues to show impressive economic results.