While Tajikistan and Uzbekistan are flirting with the U.S. for the sake of getting personal benefits, Kazakhstan and Russia along with Belarus are going to integrate the joint air defense system by 2013. For this purposes, Astana and Minsk will receive S-300 system that never went to Iran. This decision has caused concern in Lithuania. Protests from the West are awaited. 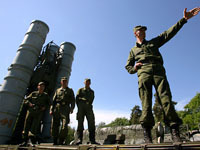 Now, according to the CSTO agreement, the joint air defense system is active in five countries of the CIS. It is noteworthy that this list includes Ukraine, even though on a bilateral basis. Games with the European Union are one thing, but so far Kyiv prefers to trust its own safety to Moscow. Tajikistan, Turkmenistan and Uzbekistan nearly ceased their participation in this program. This is not surprising given that the alliance promised more money if Tashkent, Dushanbe and Ashgabat are supportive of the U.S. Army.

Alexander Lukashenko and Nursultan Nazarbayev honor each letter of the contract and do not intend to refuse cooperation with Russia. These mental and cultural idiosyncrasies that unite the three countries are foreign to other Central Asian states and even more so Eastern Europe, whose political direction has long been shifted towards the European Union. Perhaps, a slight cooling in the relations between the CIS countries is quite natural. In any case, for the Kremlin today it is not very beneficial to pull Ashgabat, Dushanbe and Tashkent over to its side exclusively for military purposes. They are well aware how important they will be after the U.S. withdrawal from Afghanistan.

Ashgabat has not participated in the meetings of the Coordinating Committee on Air Defense at the Council of Ministers of Defense of the CIS since 1995. Moscow has welcomed the resumption of participation of Turkmenistan in the meetings of the delegation of CIS Air Defense Coordination Committee. However, Turkmenistan's air defense is self-sufficient.  "They do all types of repair and maintenance on their own," GeorgiaTimes quoted Russian Air Force Deputy Chief of Defense, Major General Pavel Kurachenko.

However, Moscow did not rule out the prospect of accession to the united defense of Tajikistan, Uzbekistan, and Kyrgyzstan. So far the bet is placed on reliable partners - Astana and Minsk. This cooperation has already angered Lithuania, because Belarus and Kazakhstan may end up with anti-aircraft S-300 to protect their borders, which Vilnius does not like. The local Sejm in February ruled that it was an aggressive military alliance and not air defense system that is being created next to the country borders.

"There is no warming between Belarus and Lithuania, because strong military strategy of the two states is being carried out. Lithuanian entrepreneurs conducting business in Belarus should focus on the stable EU and NATO, because the desire to rush into privatized space of Belarus will make them hostages," Regnum quoted member of the Committee on Foreign Affairs of the Seim Emanuelis Zingeris.

Today it was announced that Kyrgyzstan has opened a regular meeting of the Coordinating Committee. The closest joint military training exercise for air defense will be CIS air defense exercise "Clear Sky" to be held in October of 2012 in Kazakhstan. Apparently, the fears of the Baltic and other European fosterlings of America do not concern the leadership of the countries who designed their response to NATO.

What should the combined air defense system be like? Since the problem of the European missile defense is one of the hottest in Russia's relations with the United States and NATO, there is a serious problem of military security. After the collapse of the Soviet Union, Moscow naively believed that the new joint defense will be based on close relationships and interdependence of all ex-military components. However, many neighbors in the CIS countries have not resolved their territorial disputes and the division of ex-USSR property is not over. Despite the fact that many countries have capable armies, the aggressor is no longer fighting with the Army and Navy.

Now, the Alliance uses mainly military aircraft. Accordingly, the only shield is air defense system. Reluctance to invest in air defense resulted in Saddam Hussein and Iraq's defeat in the shortest period of time, while "humanitarian bombing" of Belgrade  lasted several months since Yugoslavia had an old, but still quite effective air defense.

While Russia, becoming the successor of the Soviet Union, wondered what to do about a new air defense system, the Bush administration in 2002 decided to deploy strategic bases of interceptor missiles and radar defense system in Europe. Later it was placed in close proximity to the Russian borders - in Poland and the Czech Republic. Accordingly, Russia has to have a response for every American step.

In the meantime, only Belarus and Russia have the joint air defense system. Now the Russian army has four divisions S-400, two of which are deployed in the Moscow suburbs, one - in the Baltic Fleet, and one - in Nakhodka. By the end of 2012, when Astana and Moscow intend to complete the creation of the joined defense system, Russian forces will be given the fifth set of the regimental S-400.

According to Doctor of Military Sciences, retired Lieutenant-General Mikhail Naumenko, the majority of the territory of the CIS states is relatively small, and the speed of modern air attack increased so that the national air defense forces may simply not have time to use or fully use their fighting potential. The depth of the territories of Central Asian republics ranges from 100 to 400-500 kilometers, Caucasus - from 150 to 300 kilometers. At the flight speed of modern air attack devices of 2,000-2,200 miles per hour, they will reach the borders of the republics in three to 15 minutes.

The resisting Tajikistan, Uzbekistan and Turkmenistan have much to lose. Their participation in the common benefit of defense is obvious. It should be remembered that the main NATO allies - Germany, France, Canada and Britain - have rejected the U.S. strategy of the European missile defense. They stated that such actions jeopardize strategic stability. The U.S. has not renounced intervention in Iran adjacent to Uzbekistan.