The Defense Ministry of Belarus continues to deny the alleged invasion of a foreign aircraft in the nation's airspace. The plane dropped teddy bears with leaflets in support of the local opposition. 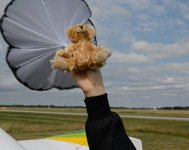 The website of Swedish tabloid Aftonbladet has recently uploaded the video of a light airplane dropping small dark packages on the ground. At some point, the camera captures a teddy bear in a red shirt and a leaflet with the following inscription in English: "We support the Belarusian struggle for freedom of speech."

The caption for the video says that it was exactly the aircraft that dropped the teddy bears on the territory of Belarus. Internet media also claimed that it was possible to identify the place of the landing. The locals recognized the Church of the Holy Euphrosyne of Polotsk and the construction on the central square in Ivents (a town in the Minsk region, 120 km from the Lithuanian border). It was previously said that the toys were dropped above the territory of the Belarusian capital — Minsk. The city is located 50 km far from Ivenets.

Last Wednesday, the Defense Ministry of Belarus said that foreign planes had not violated the air border of Belarus on July 4th. Commenting on the same video footage that appeared the same day, officials noted that it was a fake video and a provocation.

"Having analyzed the provided photo and video materials, experts saw poor quality job that had been done with the use of elements of visual fraud, which clearly indicated the provocative nature of the information provided," the Defense Ministry told Interfax Thursday.

"Air traffic services control the airspace of the Republic of Belarus permanently," officials at the Ministry of Defense stressed out.

Border guards conduct the visual control of the airspace of Belarus non-stop. No violations have been reported during the recent years, officials with the State Border Committee of Belarus told Belta news agency.

The visual control of airspace is carried out with the use of special instruments that allow specialists to keep track of all low-flying air targets.

"There were incidents when aircraft could cross the airspace of our country illegally, but all of those cases were recorded, and the information about them was delivered to air defense forces promptly", — the State Border Committee said. However, there were no such cases registered during the recent years.

Spokespeople for the border agency stressed that even if such transgression had occurred, it would have affected the reputation of two defense systems. One of them is a system of Belarus and Russia and the other one is a NATO system: it is NATO forces that patrol the airspace over Lithuania.

At the same time, the border guards do not control the border of Belarus and Russia. The two countries share the same air defense system.

The hype around this story was raised by Swedish publication The Local. It said that in the morning of July 4 a light aircraft piloted by Swedish nationals departed from Lithuania and entered into the airspace of Belarus without permission. The plane subsequently dropped hundreds of teddy bears with slogans in support of freedom of speech in Belarus. The action, according to the newspaper, was to support the democratic processes in the Belarusian society.

The Swedish publication did not mention the model of the aircraft. It was reported that the flight lasted for about an hour and a half. According to The Local, the stunt was organized by Swedish advertising agency Studio Total. The agency previously took part in the action of Belarusian feminists by giving them 100,000 kronas.