The Syrians are in hopeful expectation of an international meeting convened by Russia, and negotiations are underway to reach a solution to the crisis of this nation that survives in the Levant. 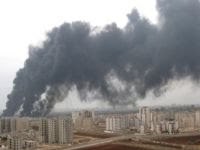 In this sense, the press reflects that the visit that will be carried out in Iran in the morning with Russian Foreign Minister, Sergei Lavrov, to discuss the situation in Syria and preparations for the meeting of the countries of the G-6 around the nuclear program of Iran

The Russian news agency ITAR-TASS indicated in a report that the purpose of the meeting will be mainly to seek actions to support the implementation of the peace plan of the Special Envoy of the UN, Kofi Annan, and to put an end to the problems that impede it.

This falls within the efforts to find a political solution to the crisis in Syria, heated up in recent weeks by the actions of armed bands of terrorists and the responses from government forces.

This Monday (12th), two journalists from the Syrian television station Ikhbariya were injured when their vehicle was the target of fire in Hifa, in the province of Latakia, 350 miles northwest of Damascus, in the Mediterranean region.

In respect, the National Press Council expressed its condemnation for the assault against the professionals while they were developing their journalistic work.

On the other hand, an armed group detonated an explosive device against a gas pipeline between the al-Zebari and Sa'alo villages, in the province of Deir Ezzor (northeast), causing the leakage of 400 cubic meters of gas, according to a report from the SANA Syrian news agency.

As a result of the attack, two generators of a power plant were out of service, said a source from the Ministry of Electricity, quoted by the agency.

Clashes between government forces and armed groups continue in the areas of Douma, Damascus countryside, Haffah in Lattakia, among other areas of the Syrian geography, part of the offensive launched by the authorities to destroy armed groups terrorizing the civilian population.

Further actions were reported in the region of Idleb, where irregulars attacked civilians and military, and due to government response, several terrorists were killed.

In recent days, there has been a spate of clashes, which observers attribute to the government's decision to respond to calls of the population to act with an iron fist against armed groups of terrorists to destabilize the country.