A Latvian nationalist threatens the "non-titular nation" with violence similar to that displayed by the perpetrator Anders Breivik in Norway. All requests of Russian activist organizations so far remained unanswered. This is understandable: after all, the authorities have been strenuously creating the image of the "Russian enemy" for 20 years. But in the end it may end in disaster. Breivik, too, was not taken seriously.

Representatives of Latvia's Russian organizations are sounding the alarm. None of the requests of the activist have been answered by Latvian authorities. 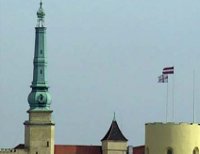 On June 3 the party ZaPcHeL ("For Human Rights"), as well as several non-governmental organizations defending the interests of the Russian-speaking population of Latvia received three threatening e-mails. The text was: "YOU HANGERS OF MOSCOW - GO AWAY! WE, TRUE SONS OF LATVIA, WILL NOT ALLOW HUMILIATION OF OUR LANGUAGE BY THE LANGUAGE OF THE OCCUPIERS. EUROPEAN PARLIAMENT IS A CESSPOOL FOR RUSSIAN PIGS. NORWAY WAS ONLY THE BEGINNING".

A couple of days later, the activist of the community "Mother Tongue", lawyer Illarion Gears, sent a letter to the Latvian Prosecutor General's Office, where he requested to check the fact of the threats that were sent to the mailboxes by Marcus Dombrovskis. There was little doubt that by Norway the sender meant the case with Breivik.

According to Gears, it is not the first time when he asked law enforcement to deal with the antics of radical Latvian nationalists. Earlier Latvian high school students in Riga tried not to let Russian activist organizations in the school. On the door there was a piece of paper with obscenities about "Russian pigs". There has been no response from law enforcement agencies.

There is little hope for a full investigation in this case. Because of this, Gears is going to collect the information of all cases of inactivity of law enforcement agencies in the matters of outright incitement to ethnic hatred and to transfer them to the European Commission against Racism. However, until now Latvia was slightly berated and no sanctions have been implemented.

For its part, the Latvian Human Rights Committee (LKPCH) called on everyone who had received a threatening letter to send it to the Security Police of Latvia. The former member of Seim Vladimir Buzaev stressed that no one other than the Security Police creates a situation where the existence of such letters becomes possible.

"The security police may initiate criminal proceedings against itself, as in its report there are indications of inciting ethnic hatred. But it will not do it. There is nothing surprising about it. PB is part of a racist system created in Latvia. It is running as part of this system," said Buzaev.

The fact that the security police are not particularly interested in the home-grown "Breivik" is clear from last year's report. It clearly gives the priority to combating organizations subjected to "the dangerous influence of Russia." They say that the Russian leadership stepped up in terms of creation and coordination of public organizations of Russian speakers. The agency was troubled by an attempt to strengthen the role of the Russian language.

"Guardians of all things Latvian" are highly dissatisfied with the fact that Russia is expanding its cultural space by creating Russian centers in the Baltic International Academy and the University of Daugavpils, and holds Days of Russian culture. They say that while the policy of Latvia is aimed at consolidating of the Latvian society, the policy of Russia is aimed at its segregation.

Letters from Marcus Dombrovskis are very alarming. It seems that the nationalist hysteria in Latvia starts to go beyond all limits. So far, the Baltic country (despite the defeat of the Russian's rights) was still compared favorably with the countries of Central Asia, where Russians were periodically killed. The quality of life of Russians in Latvia and Tajikistan, to put it mildly, is also incomparable.

But when it comes to physical violence, it is time to think about it. Before the case with Breivik Norway was considered one of the quietest countries in the world. The intelligence services missed the maturation of the monster. Now a similar monster (God forbid) is maturing in Latvia. And the image of the enemy in the face of Russian here, unlike in Norway, is grown by the authorities.

The appearance of these messages is the verdict to the entire national politics of post-Soviet Latvia. Instead of making Latvia for all (and many local Russians are the indigenous residents, as in the east there are many Russian villages), the authorities immediately determined that their language is the language of "occupation."

Honoring the Latvian SS who had fought with the Red Army, talking about the years of "darkness" in the Russian Empire and the Soviet Union, introducing a non-citizen passport and affecting the rights of the Russians, Latvian leaders can invite disaster. Many young people and people with unstable mentality take it all too literally. You never know, they make take up arms.

Naturally, in response to shots from the Latvian side in the absence of a proper response of the authorities, Russians will take up arms as well. It will be extremely difficult to present the situation as the political struggle. Of course, it is still too early to write an apocalyptic scenario. It may not be more than just e-mails. There is a very big difference between words and deeds. However, Breivik also started with words.