Israel cracks down on draft dodgers

The Israeli army is losing recruits. Last year alone, the number of deserters and evaders has increased by 700 people. At first glance, the shortfall of several hundred soldiers is not so bad for the IDF. However, army chiefs fear that the motivation of conscripts will fall every year,  and there will be more avid evaders. 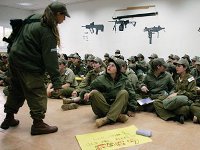 To prevent further deterioration of the situation, the government and the Knesset are taking additional measures aimed at improvement of legislation regulating the conditions of service in the ranks of the IDF. Tal Law that is the basis of conscription, according to local officials, is obsolete. It provides for a number of items allowing thousands of young people to officially remove themselves from the "sacred military duty."

The largest group of Israelis who are not subject to mandatory conscription are haredim (religious Jews). The debates over this dubious privilege have been ongoing for a long time. The government traditionally has many supporters of the abolition of indulgences for the haredim. But at the legislative level the amendment of the compulsory service for religious Jews will not be as easy as it can cause resistance of the influential Shas party. Nevertheless, the development of a new law on conscription in the Israeli army is already underway. According to local media, in mid-May on the order of Prime Minister Benjamin Netanyahu, a commission was formed to develop the law on appeal, which in the long term will replace the Tal Law.

The good news for soldiers, especially for those who are called upon to combat units, could become a "financial incentives" in the form of wages. Allowance was paid in the IDF in the past, but for NIS 300 soldiers it was only enough for pocket money. Now, wages will be at least 2.5 thousand shekels. The highest salary will be paid to combat soldiers - 3.5 thousand shekels a month. Initially, the initiative to review the payment system in the military was put forward by the notorious Israeli politician who nearly lost the Second Lebanon War, former Defense Minister Amir Peretz. Under the new rules, the soldiers will receive a monthly cash gift in the final year of service. Women who are on active duty in the IDF will be paid salary in the last six months of service.

52 members of Knesset have given their signatures in support of this proposal. However, this measure will affect the country's budget as its implementation will require 500 million shekels a year, according to Israeli portal Zman.com. However, Israeli economists have found a way to "save" on the monetary allowances for conscripts. It is assumed that part of the money that used to accrue in the form of a "gift" at the demobilization will now go to salaries.

At the same time the punishment for desertion may become stricter. The Ministry of Defense intends to promptly and strictly deal with evaders, regardless of their gender and age. Now, those who failed to appear before the draft board five to ten years ago will not be able to justify themselves with statute of limitations. During a recent raid where the police was searching for deserters 374 people have been arrested. Among them, there was also a 40-year-old man, who was arrested for desertion committed 20 years ago. The authorities of Israel seriously approached the identification of evaders. Special groups were formed to capture the deserters, and they are supported by police. There are documented cases of draft evaders that physically resisted the arrest.

75 per cent of those detained during the May police raids were indicted. Among them are many women who are also subject to mandatory conscription. But, according to official statistics, one of two Israeli females rejects the draft.

It is interesting that Israel has the same trends as Russia, where most of all draft evaders reside in the central part of the country. According to army sources referenced by information agency "Cursor," at least 60 percent of draft evaders and deserters live in the heart of Israel, and only 20 percent - in the north and south.

Statistics inevitably suggests that the number of those willing to evade the service under any pretext is increasing. Notably, there are twice as many of those who did not want to undergo mandatory military service than those who escaped from the alternative service: 1800 vs. 900. These are the evaders who did not even attempt to provide a legitimate reason.

Another option is to legitimately evade conscription. Today, according to "Cursor" agency, every fourth young man of military age, and every other woman are not summoned in the IDF.

Meanwhile, the military-political situation in the region is escalating, along with the question of summoning additional soldiers to the Israel Defense Forces. Shortly after the events in Egypt and Syria, hundreds of reservists were suddenly summoned to military enlistment offices. In total, the IDF plans to attract over 20 battalions of reservists to increase the military presence in border areas in the north and south.