Clinton calls on India to stop buying oil from Iran 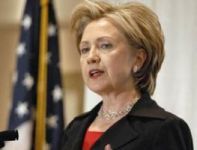 The head of U.S. diplomacy, Hillary Clinton, said today that as part of its obligations to the international community, India must suspend its imports of Iranian oil.

Visiting the city of Kolkata (northeast), Clinton acknowledged the Indian stance on various issues of global importance, but added that one of its pending duties is to limit the purchases of oil from Iran because "there are other producers able to meet their energy needs," such as Iraq or Saudi Arabia.

After emphasizing the need to press the regime in Tehran to review its nuclear policy - that the west considers it to have a military purpose - she claimed that the position of countries like India is key to that goal.

"We think this is part of the role of India as a member of the international community," said the Secretary of State, quoted here by the news agency IANS. Clinton reiterated that Washington is calling on China, Japan and some European countries to cut their dealings with the Persian state.

Iran meets between 10 and 12 per cent of the Indian oil need and is its second largest provider, behind Saudi Arabia.

The theme appears as the greater divergence between New Delhi and Washington will surely be the highest on the agenda during the three day of the visit of Clinton to the South Asian nation.

Clinton will travel today from the ancient city of Calcutta to the Indian capital, where she will talk separately with Prime Minister Manmohan Singh and the President of the ruling United Progressive Alliance, Sonia Gandhi.

Early the next day, she is to meet with the Minister of Foreign Affairs, S. M. Krishna, in order to set the agenda for the third round of Strategic Dialogue United States - India, scheduled for June 13th in Washington.

Other expected topics will be bilateral civil nuclear cooperation, the situation in Afghanistan, the possible contributions of India to stabilize that country and other matters related to regional security.

One wonders what form of belligerence, blackmail and bullying Ms. Clinton will use to get India to tow the line and submit to US dictates.  Perhaps she should get on her broom and fly home.  No one is interested in her nonsense.  She is not a diplomat, but an enforcer, an unwelcome one at that.