The election results in France and Greece leave a crystal clear message to those grey elements controlling the European Union, a message from the people who they never bothered to consult as they imposed a failed super-state in an arrogant top-down approach. The Merkozy space is dead. R.I.P. 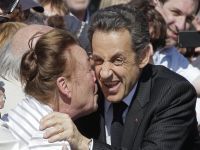 Let me take that back. The Merkozy space is dead, now rot in Hell for all eternity. The message is clear: the people do not want your European Union and the more people you ask, in a democratic process called a Referendum, the louder the message will ring in your ears. It is by now patently clear that the centre-right approach to the economic crisis which the political right created, is pitifully inadequate and woefully out of touch. That is why Hollande beat Sarkozy in France, that is why the Greek elections have ended in a stalemate.

Any student of elementary economics knows that the way to stimulate an economy is not to take money out of it, but to inject money into it, yet what does the faceless army of Eurocrats do? It increases taxes, it does little or nothing to stimulate employment, little or nothing to help save companies in difficulty and then gets itself into negative spirals of development when it has to pay more and more money out in unemployment benefit and receives less and less money from taxes. The more you tax, the less money you have - it is an economic rule which seems to have bypassed this incompetent band of failed managers gravitating around Brussels and Strasbourg.

Something else which passed them by thirty years ago - and anybody could have seen it coming - is that if you pay countries not to produce, if you pay farmers to bury their crops and sell their cows, if you pay fishermen not to fish, then downstream the effects on employment will be felt years later as communities based upon thousands of years of history are destroyed. And what were the governments thinking of when they were negotiating away their fisheries and their industries and their agriculture?

They were destroying jobs, they were destroying the futures of their countries' children. Then when their wonderful economic system enters yet another of its boom and bust cycles, sweeping millions of people into poverty as the rich get richer and as the middle classes move down two cogs further towards endemic poverty, what do they do? They find money to bail out the banks at the drop of a hat and then instead of finding money to create jobs and build schools and fund hospitals, they impose draconian austerity measures on the people, whose only crime was to have done everything that was asked of them.

As if that was not enough, they then impose a single currency without asking anybody, without explaining the consequences, which is hardly surprising because they did not know what they were, and without knowing what they were doing, pressed ahead in an anti-democratic, arrogant manner which defies their legitimacy to govern.

Then they allow foreign ratings agency to have a direct say in financial policy, they spend billions and billions on NATO, which was elected by nobody and is doing precisely what? Defending Europe from an invasion from Burkina Faso? Or Saturn? Or murdering children in Libya while supporting terrorists in Syria?

And when, in their wisdom, they have led their countries to abject misery and economic and financial ruin, they call in The Troika, another faceless gang of incompetent wannabe economists, who despite having lists of diplomas as long as their arms, defy logic by imposing austerity measures in return for bailouts which push their sovereign credit ratings to impossible levels. Let us be honest: on which planet or in which galaxy can an economy which is showing growth rates of below one per cent, be expected to honour debts with a seven-per-cent interest rate?

No wonder the people are fed up. Given that the European Union's leaders in their collective wisdom are incapable of producing any ideas and reply wanly "we don't know" when asked what to do, then let us produce some ideas ourselves:

Thirdly, let us dismantle the Eurocratic Union, let us send the Eurocrats back to where they came from, let us have our frontiers back, let us have our currencies back so we can use them as leverage when we need to and let us stop imposing German measures on economies like Portugal's, or else conversely, give the Portuguese German salaries and then treat them with the same set of weights and measures.