Africa...Organic Produce: Back to Basics 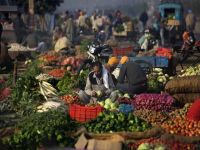 There were several conclusions from the United Nations sponsored Second African Organic Conference in Lusaka., Zambia. So important was this conference that it was backed by the United Nations Conference on Trade and Development (UNCTAD), the African Union, the International Federation of Organic Agriculture Movements, the UN Food and Agriculture Organization (FAO), the Zambian Ministry of Agriculture and Livestock, the Organic Producers and Processors Association of Zambia and Grow Organic Africa.

Translated in practical terms, this means that Africa's concentration on organic farming and not the western-backed genetically modified production methods, will mean that not only will the continent's nutritional needs be catered for, African farmers will also be in a position to sell and gain added value from their activity, for their communities.

For a start, organic production avoids expensive chemical products - 90 per cent of which are imported into Africa; secondly UNCTAD predicts that organic farming will increase yields by at least 100 per cent; thirdly organic production preserves soil and does not destroy it and fourthly, it guarantees a sustainable production with healthy results.

All of this creates added value and jobs in rural areas, stemming the exodus to the cities where jobs are now scarce.

The conclusion is that organic production is vastly superior to the laboratory-controlled "scientific" western methods, which this column has already started to investigate. It makes sense to adopt a humble approach, which makes sense if we see that traditional farming practices cater for local needs better than far-flung ideas from graduates who may never have been to the region they are planning for.

After all, Africans are not stupid.