Europe without borders to sink into oblivion

Interior Ministers of Germany and France are raising the issue of the return of border controls within the Schengen area for consideration of their colleagues from other EU countries. It seems that the principle of "Europe without borders" has stopped working because of the huge influx of refugees from Africa and Asia. The unity of the EU is cracking at the seams, but there is no other obvious way to stop the flow of illegals. 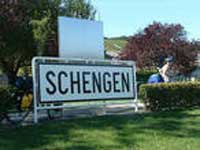 A meeting of the EU Interior Ministry that has on its agenda partial cancellation of the Schengen Agreement started in Luxembourg on April 26. It is especially interesting that the initiative comes from the pillars of the EU - Germany and France.

Before the negotiations in Luxembourg Interior Ministers of France and Germany, Hans-Peter Friedrich and Claude Gean, put the radical proposal on the agenda. They suggested amending the text of the Schengen agreement, granting the right to any individual country to introduce border controls for up to 30 days. The Ministers referred to the "inability of some members of the European Union to protect their borders due to the influx of illegal immigrants."

Several European experts say that the current proposal is an attempt to help President Nicolas Sarkozy to get re-elected for the second term. Sarkozy, according to opinion polls, has very little chance to retain his residency in the Elysee Palace. Largely for the sake of improving his rating, Sarkozy during his campaign called for a reform of the Schengen Agreement and tightening of the immigration regime.

Even if there was no French presidential election, the future of the Schengen agreement would still be at the forefront of the European politics. Large free areas from Warsaw to Lisbon and from Athens to Oslo are one of the cornerstones of the European unity, one of the pillars of the EU, an important symbol of European prosperity. But what if the well-being no longer exists?

The Schengen Agreement (or more precisely, two documents from 1985 and 1990) implies the free movement on the continent of people, goods, capital and services, and a transition from a loose European Economic Community (EEC) to the more monolithic European Union (EU). It came In effect in 1995 - three years after the EU was created.

Originally it consisted of Germany, France, Holland, Belgium and Luxembourg. Then it was joined by Italy, Spain, Portugal, and Greece. Then came the turn of Austria, Finland, Sweden and even non-EU countries, Norway and Iceland. With reservations, the document was adopted by Denmark. Britain remained on the sidelines, and closely connected with it Ireland was forced to reject the treaty.

In late 2007 there was a big expansion of the Schengen zone. Its ranks were joined by Estonia, Latvia, Lithuania, Poland, Czech Republic, Slovakia, Hungary, Slovenia and Malta, as well as non-EU Switzerland. Last year there were reports that Bulgaria and Romania were at the turn. However, for the poorest countries of the EU the door to "Schengen" is still shut. Local Gypsies and failure to ensure the safety of the external borders of the EU have taken their toll.

More or less an agreement was working, although there were some "glitches". The authorities of Latvia and Estonia periodically closed the border to prevent the Russian-speaking activists from taking part in the anti-fascist actions in the neighboring state. The German state of Bavaria has kept the passport control at the border with the Czech Republic, due to the special status of the Bavarians in Germany and historically tense relations with the Czechs.

The "Arab Spring" has changed everything. Thousands of people from Tunisia, Libya, and Egypt in search of better life headed for Europe. The name of the Italian island of Lampedusa that sheltered refugees has become infamous. Europe also sees refugees from Africa and ​​ Asia. They enter the EU through Greece, and through the Spanish-owned Canary Islands, an overseas territory of France. Greece undertook to even build a wall along the border with Turkey to stop the flow of illegals.

Last April a severe crisis struck the Schengen Agreement. France did not allow in the refugees who settled in Lampedusa, which caused a diplomatic scandal between the two countries. Taking advantage of the moment, Denmark regained permanent border controls with its neighbors. Exhortations from the EU had no effect on the Danes. Bavarian authorities have threatened to regain control of the border with Austria. Switzerland had the same thoughts around the perimeter of its borders.

Now, one politician after another speaks about the crisis of the "Schengen". This crisis is evident. At a meeting of the European Central Bank in Barcelona on May 2-4, Spain will temporarily close the border to the country to keep the anti-globalists out. Poland will do the same during the European Soccer Championship. The Russians who have Schengen visas will not be affected, only their passports will be checked. But the principle of the "Europe without borders" seems to be a thing of the past.

The current situation of refugees shows that the foundations of the European Union disintegrated at the first acute crisis. The Europeans do not seem to have another way out. Bulgaria did not find money in its budget for the construction of a wall along the border with Turkey, so the "Schengen" will not be happening there. There is no guarantee that the wall would help as many refugees come to Europe by sea.

It is unlikely that the Schengen agreement will be completely gone. Europe is too small to hurt the principle of free movement. Millions of Europeans would be inconvenienced. The number of Russian tourists would be reduced because many tour several countries.

However, the main point of the "Schengen" reform is to reduce the percentage of illegal immigrants. Something has to be done about the flow of Asians and Africans. The return of border controls could help.