Is Tymoshenko simulating her disease?

Against the backdrop of the reports of a hunger strike by former Prime Minister of Ukraine Yulia Tymoshenko, a scandalous video that may be indicative of the simulation of her serious illness has emerged. The video is dated December 15, 2011, when Tymoshenko was still in Lukyanovka jail in Kiev, "Vesti" reported. Even then, she complained of severe pain in her back and stayed in bed. 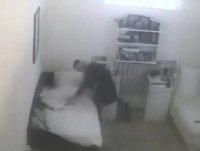 A video posted on YouTube displays a woman resembling the former premier, who is moving around the cell with ease in high heel shoes and looking into the mirror. Suddenly she seems afraid of some noise and dives under the covers. The camera then shows a person resembling Tymoshenko's lawyer Sergei Vlasenko. The man helps her up - now a woman moves with difficulty.  They hug.

A couple of days ago Vlasenko told reporters that, in protest against the beating during her transportation on Friday to Kharkiv Central Clinical Hospital № 5, Tymoshenko refused to take food starting April 20th. "Yulia Tymoshenko is on a hunger strike. Her hands are bruised, there is bruising on the abdomen. Despite the fact that it's been 4 days, they are still visible," said the defender.

On Tuesday, Ukrainian prosecutors acknowledged that Tymoshenko was taken to the medical institution by force, but the prosecutor Gennady Tyurin said that the former prime minister was not beaten. "In accordance with the Criminal Code of Ukraine Prison Service has the right to use physical effects: take your hands, carry you in a car, take you to a hospital. This was done," said the prosecutor.

Meanwhile Tymoshenko's description of Friday events became public: "Three men of strong physique came into my cell. They came up to my bed. Threw a sheet over me and began pulling me from the bed. I began to defend myself as I could and got punched in the stomach. They tied my hands and feet and pulled me on the sheet into the street. I thought that it was the last minutes of my life, " wrote in her complaint the former prime minister.

Tymoshenko's lawyer Serhiy Vlasenko said that at the request of his client medical department staff of Kachanovsky colonies on April 23 recorded her injuries inflicted during her involuntary admission to a hospital in Kharkov, the website of Yulia Tymoshenko reported.

"On Monday Yulia Tymoshenko called the chief of the medical department of the colony, the supervising prosecutor, the doctor on duty and in the presence of all these people she has shown them her injuries. They have recorded them, and said they were included in her medical card. We do not know whether they did it or not because we cannot check this," said Vlasenko to TV Channel 5.

According to Vlasenko, the prosecutor offered to examine Yulia Timoshenko to see if these were self-inflicted injuries. "I cannot imagine how you can hit yourself in your stomach to cause a hematoma the size of a fist that is still visible four days later," said Vlasenko.

The prosecutor Gennady Tyurin told reporters that his office has reviewed the complaint and refused to institute criminal proceedings "due to the lack of evidence."

The accusations of Tymoshenko against her jailers have stirred the Ukrainian parliament. The Rada was blocked by the opposition demanding a commission to investigate the incident.

The European Commission appealed to the authorities of Ukraine, demanding an "urgent explanation" of the situation with the former prime minister Yulia Tymoshenko, who declared a hunger strike and complained about the violence during transportation to a hospital, reported RIA "Novosti".

"We demand an immediate explanation from the Ukrainian authorities on the situation with Ms. Yulia Tymoshenko and insist that competent independent persons and her lawyers were given immediate access to her for a sufficient length of time," said spokesman Stefan Fule.

On Tuesday the Russian Foreign Ministry also expressed concerns about the situation around Tymoshenko. "We hope that Ukrainian authorities will take all necessary measures to fully respect the legitimate rights of Yulia Tymoshenko with humanity, and find an adequate way to resolve the situation without complicating the political situation in the country," said the official statement of the Ministry.

In October of 2011 the ex-premier was sentenced to seven years in prison for abuse of authority when signing the gas agreement with Russia in 2009. Since late December, she has been serving time in prison in Kharkov. Kiev District Court of Kharkiv on April 19 began consideration of the second case against Tymoshenko referring to a financial fraud committed at the time when she served as head of the corporation "United Energy Systems of Ukraine" in the 1990s.

Tymoshenko, whose doctors have identified back issues, last Friday moved her from the prison to a hospital. She did not give a written consent for the transportation. The former Prime Minister refused the services of physicians, and on Sunday was brought back to the colony.