Brazil's President: BRICs should send out a strong message

President Rousseff said recently in a seminar for about 300 experts from Brazil and India, which are countries within the BRICs - Brazil, India, Russia, China (and South Africa) - where the main growth of the world economy is concentrated, that these countries must take "a strong message of political cohesion" to the summit of the G-20 in June, Mexico. 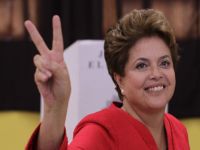 According to the Brazilian President, emerging markets and particularly Brazil and India, should use the opportunity to criticize the expansionist policies of rich countries, requiring them to "take effective measures to ensure global economic recovery."

In her speech, Dilma returned to demand reform in the international lending institutions like the World Bank (IBRD) and International Monetary Fund (IMF), with increasing participation of emerging nations in their decisions, and the Security Council of the United Nations (UN), which she says is "lacking legitimacy and effectiveness."

For Dilma Roussef, Brazil and India have "solid credentials to fight the effects of expansionary monetary policies in the developed world, who have taken the necessary steps to ensure the expansion of their economies." She acknowledges that there has been an improvement in the situation of crisis that could have been sharper, but reiterated that are essential measures to ensure growth to reverse the situation.

Dilma Roussef added that while the crisis was not created by developing countries, emerging economies have suffered from the effects of it, "our economies have suffered economic slowdown processes derived from this international scenario." After you highlight the "enormous and unquestionable potential" prospects for expansion of business between Brazil and India, which should grow from $9.2 billion today to $15 billion by 2015, Dilma Roussef recalled that the two countries guaranteed their increases by increasing their internal markets.

Dilma Roussef challenged entrepreneurs, saying that despite the growth of trade between the two countries being 20%, from 2010 to 2011, it is still very little, given the potential. The trade today, she noted, is highly concentrated in oil and derivatives and "needs to diversify." Dilma endorsed the words of the Indian Minister of Commerce, Sharma Annad, that this is the century of the BRICs.

Source to original article in http://port.pravda.ru