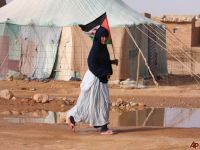 The world community by and large either turns a blind eye to the annexation by Morocco of the Western Sahara, home to the Saharawi people, invaded, tortured, abused and forgotten or else cavorts openly with Morocco, signing contracts with the invading power to usurp the resources of the Saharawi without their consent, against international law.

Fight to the death

Five Saharawi political prisoners have withstood a heroic hunger strike since March 2: Mahjoub Oulad Cheik, Atiko Barray, Hassan El Ouali, Abdelaziz Barray and Cherif Ennassiri. They are held in deplorable conditions in the Black Jail of El Aiun. Why? Because they dared to take part in a peaceful demonstration for the self-determination of Western Sahara last year in the occupied Saharawi city of Dakhla. It is a Saharawi city, not a Moroccan city.

All they are asking for is justice and humane conditions. Their health and well-being are in precarious conditions.

Message from the Saharawi people

At the end of April 2012, the MINURSO mandate in Western Sahara will end and the UN Security Council will vote on renewing it.

During the last MINURSO decision, many North-African countries were at the height of the so-called Arab Spring. This, in turn, has changed the political landscape in several countries of the region.

Meanwhile, young Saharawis are showing that they have lost trust in the never-ending negotiations between the Polisario Front and Morocco on the fate of the Western Sahara. The occupied territories are becoming more and more Moroccanized. The resistance against occupation is growing by day, despite Moroccan authorities' systematic violations of human rights in the occupied territories of Western Sahara.
The Saharawi refugee camps in Algeria are lacking basic necessities because of the decrease in humanitarian aid, which has been effected by the economic crises in Europe, the drought in the Sahel, and the instability of the region.

The Saharawi people are becoming ever more frustrated with the diplomatic process, for it has reached a dead-end. The threat of a return to hostility and armed struggle is imminent. They see it now as the only way to end the occupation and bring progress for the freedom of Western Sahara.

We want to show the UN that the time is now!

If the UN keeps on ignoring human rights violations against the Saharawi people and avoids, once again, extending the MINURSO's mandate to monitoring and documenting human rights situation in Western Sahara, they run the risk of this being the last MINURSO mandate extension they can declare. The injustice, discrimination, and racism against the Saharawi people will result in an end to the ceasefire in days to come.
We want to show that we expect the UN to support the decolonization of Western Sahara by realizing the referendum of self-determination. But first, it needs to protect the human rights of the Saharawi people now, through its body, the MINURSO. We will do so by addressing a list of demands to the members of the UN Security Council. We will demonstrate in front of the embassies of the five UNSC permanent members on Saturday April the 14th 2012, at the same time (14:00) in several European countries.

The symbol of this demonstration is three monkeys: one who can't speak, another that doesn't hear and the third doesn't see, all dressed as "blue helmeted" soldiers of MINURSO who are ignoring the human rights violations. We will take pictures from the "monkey demonstrations" in front of the different embassies, and distribute them to the media.

A group of young activists in Berlin and Madrid will make this happen in some European capitals, while Saharawi students will protest in the same way in front of MINURSO's office in the refugee camps.

We need partner-groups in other capitals who can help us make this idea more powerful and visible. Let us show Morocco that we will not keep on waiting silently, and that Saharawi youth have friends and supporters in European capitals who will strengthen their voice