Where men can scald women with impunity 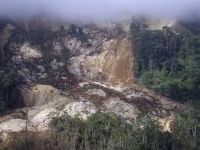 For thousands of years, society in Papua New Guinea has been patriarchal and men have been able to beat, punch, punish or kick, scald and insult women with virtual impunity. Women appear at the few support centres that exist having been hacked with machetes, with open skull fractures after being bludgeoned with stones... after being kicked in the belly with a heavy boot while heavily pregnant. Gang rapes, knife attacks and beatings of women are commonplace. However, new laws are in place and the UNO is watching as war is declared on violence against women in this forgotten bastion of humankind.

So endemic is the violence that an aid worker working with MSF said "Because it's so widespread, women think this violence is normal. They have developed a mentality where they say, 'It's OK to beat me up with a stick but don't chop me up' and this mentality is really stuck in their head". She added "Making them understand that beating with a stick is not OK, they don't deserve it - even that is quite hard. Deep down, it boils down to where society places women here."

According to CARE International and Save the Children.22 per cent of women aged 15 to 30 had experienced forced sex in 2009 in Bougainville, while in Eastern Highlands, the figure was 15 per cent for the same age group. In Southern Highlands, the local centre receives 65 new cases of domestic violence and between ten and twenty cases of sexual violence each and every month.

Ume Wainetti, National Programme Director of Papua New Guinea's Family Sexual Violence Action Committee (FSVAC) stated in an interview with AlertNet: "We also make excuses for why men should behave the way they behave, trying to say things like, 'he's a man and he can do these things'."

The country's age-old patriarchal system may explain in part the attitude of men towards women, leading some of them to believe they can prove themselves through violence and go without punishment. Tribal violence is also part of the problem - this small country is home to around 800 languages. Coupled with this, frustration engendered through endemic poverty - over a third of the population of 6 million people live below the poverty line - and this, fuelled by alcohol, lends a hand.

Polygamy is another issue involved, for neglect of the first wife and her children can often spiral into rejection and violence as a new wife is favoured.

Gender inequality is rife in terms of school enrolment, access to healthcare and to employment. Secondary school enrolment rates for girls are 50% those of boys. There is one woman in the Parliament of 109 members. A proposal last November to increase the number of female seats to 22 did not get enough votes to pass as law.

On the UN Gender Inequality Index, Papua New Guinea is near the foot of the table, just above Afghanistan, Yemen, Chad, Mali, DR Congo and Niger.

Secondly, she stressed the need for the authorities to challenge certain traditional values: "Violence against women is a pervasive phenomenon in Papua New Guinea, with a wide range of manifestations occurring in the home, the community and institutional settings. Domestic violence is socially perceived as a normal aspect of a woman's life and a family matter that should not be discussed publicly."

Tradition is no longer an excuse. In a globalised world there are globalised values and the globalised media needs to raise awareness of these issues.