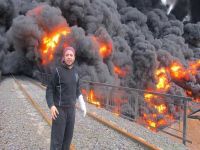 What is strange about the video shown below* (if it is not removed meanwhile from the Net, as is the norm) are in fact two things. First, as claimed, was a CNN camera set up to film the bombing of the Homs oil pipeline hours before the event, and in which case, did the CNN crew know what was going to take place? This being the case, to what extent was this crew actively involved in the event? Has anyone noticed that one of the crew was an ex-British Special Forces operational?

The second strange thing is the appearance in the video, apparently together with the CNN crew, of one Danny Abdul Dayem, a well-known Opposition "activist". Was this a media coup? Or was this an act of terrorism with the full connivance of CNN? And what are the CNN "crews"? Members of this team have covered other war zones in the region. The question arises as to exactly what they have been doing both in Syria and elsewhere.

No wonder these countries do not want western journalists running around. Or should one say "journalists"? In the event it appears they were being filmed by Syrians who suspected what they were up to.

And come to think of it, after Iraq, after Libya, would anyone be surprised by what CNN has or has not done anyway? After all, Google up "September 11 attacks sixteen hours earlier". As the west "celebrated" a terrorist strike in Homs, of course the livelihoods of countless thousands of people deprived of bread because the bakeries could no longer get fuel are irrelevant and are met with a derisory sniff. Who cares, eh?

* Two versions of the video