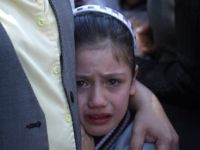 A strong earthquake, over 7.4 on the Richter scale, with its epicenter in Guerrero state, followed by an aftershock in south-central Mexico, shook buildings in Mexico City for at least a minute and made workers and frightened residents run out into the streets. A pedestrian bridge fell on a bus, plaster fell from ceilings and windows broke in the center of the Mexican capital. At least one building in the capital was about to collapse.

More than 60 homes were damaged near the epicenter that was 20 kilometers deep and 25 kilometers southwest of the town of Ometepec (municipality of 50,000 inhabitants) in the southern state of Guerrero, but there was no immediate information on deaths or serious injuries.

The United States Geological Survey (its acronym in English, USGS), which originally marked the intensity at 7.9 degrees, subsequently lowered it to 7.6 and 7.4. The initial earthquake was followed by a weaker one of magnitude of 5.1, which was felt in the capital.

Workers and frightened residents crowded the streets of the capital minutes after local time 12 noon (15h GMT). "I have problems with blood pressure, I felt I was going to faint," said Rosa Maria Lopez Velazquez, 62, outside the town hall building

The quake was felt strongly in the southern state of Guerrero near Acapulco and in the Pacific Ocean. The neighboring state of Oaxaca was also hit hard, being the scene of two aftershocks. "It was very strong, but I did not see anything fall," said Irma Ortiz, who runs a hostel in Oaxaca. Malia, the eldest daughter of U.S. President Barack Obama is spending holidays with a school group in Oaxaca and is well.

On his Twitter account, the mayor of Mexico City, Marcelo Ebrard, said the water system and other "strategic services" were not affected by the quake. Nevertheless, the telephone service in the city was down and across the whole region where the quake was felt.

Groups of women hugged and cried near the Independence Monument in Mexico City, where hundreds of people who were removed from the buildings said they had never felt an earthquake as strong. The capital's airport was closed briefly, but there was no damage to the runway, and operations continued normally.

Samantha Rodriguez, a 37-year-old environmental consultant, had to leave the 11th floor of the Angel Tower office building. "I thought it would pass soon, but the walls began to shake and I decided to go down," she said.

In Oaxaca, Sylvia Valencia was teaching Spanish to five adult students at the Vinigulaza language school when the earthquake struck. "Some of us sat down, others ran out," she reported. "It was difficult. The quake was strong and long."

In Chilpancingo, Guerrero state capital, the earthquake was felt with great intensity, but the Civil Defense of Mexico informed that there are no reports of "serious damage." The Mexican civil defense chief, Laura Gurza, said states  affected by the quake were Guerrero, location of epicenter, Oaxaca, Puebla, Tabasco and the Federal District, the capital of the country.

"We do not have serious damage to report. However, with the magnitude of the quake, there is the possibility of damage to fragile buildings, built mostly of wood, without great structures," he said.

In December, the state of Guerrero was the epicenter of an earthquake of 6.5 on the Richter scale, an incident responsible for three deaths. Mexico is one of the world's largest seismic zones, where tectonic plates Pacific, Cocos, North America, the Caribbean and Rivera interact.