Angola is to hold parliamentary and presidential elections at the end of 2012. President Jose Eduardo Dos Santos, who has been holding power for 33 years already, is going to face hard times. Many Russians are not indifferent to the fate of this country. After all, many Soviet people fought and worked there. The Soviet Union withdrew its troops from Angola in the early 1990s. What is happening there now? Does the country face an "orange" revolution? 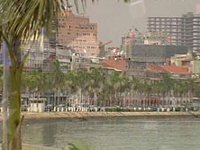 The Soviet Union was actively supporting the anti-colonial movements in Africa, hoping to establish an outpost of socialism there. Moscow opted for the Popular Movement for the Liberation of Angola (PMLA) - one of the three national liberation movements based on ethnic principles. The other two movements received the support of the U.S. and China after the collapse of the Portuguese colonial system in 1974. After the PMLA won the support of Cuba's Fidel Castro, the struggle for Angola became a lot more intense.

The USSR had been providing economic and military aid to Angola in debt. In total, the amount of the Angolan debt by the time of the collapse of the Soviet Union had made up from $5.5 to $10 billion (according to various sources). According to the Russian Union of Veterans of Angola, nearly 300,000 servicemen and 50,000 civilians had lived and worked in Angola from 1975 to 1989. The main objective was to ensure the victory of the PMLA in the civil war. In economic terms, the Soviet Union was trying to maintain what the Portuguese left. The USSR was not making any investments, nor was it delivering any technologies to the Angolans. The cooperation was not profitable at all.

In 1992, Boris Yeltsin said that Russia had nothing to do in Africa. The Angolans immediately lost their loans and the military support: Cuba had withdrawn its last soldier from Angola a year earlier. Angola excluded the word "people's" from the name of the country and abandoned the ideology of Marxism-Leninism. The country returned to capitalism and bid farewell to the socialist way of development. To be more precise, the country returned to the first, the hardest stage of capitalism - the redistribution of state property in favor of a small group of elite. The group included the president, Jose Eduardo dos Santos, and his team.

Russia continued to influence the internal processes in the country through Dos Santos. Russia was one of the three observers from the UN during the first parliamentary and presidential elections in 1992. Afterwards, the PMLA defeated the China-supported UNITA (The National Union for the Total Independence of Angola), by a margin of just 10 percent. UNITA did not recognize the elections and after the massacre of UNITA members in Luanda, its leader, Jonas Savimbi, resumed the guerrilla warfare in the south.

As for the economic situation, the holy place is never empty, as they say. American oil giants Exxon and Shell appeared in Angola at the end of the 1980s. The list of foreign companies continues with South African diamond company De Beers, the German Escom (telecommunications), the Spanish Gabrielitos (fishing) and Portuguese Mota-Engil (construction). The weak Russia made the West believe that it had left the country for good. The West staked on the stronger and the more organized PMLA. As a result, in 1993, the UN Security Council imposed embargo on the arms supplies to UNITA.

However, Savimbi was struggling for 10 years. He had a strong ally - South Africa. The latter had its interests in the diamond fields controlled by UNITA. But President Dos Santos (a graduate of Baku Oil and Gas Institute, who was married to a Russian woman) found a reliable ally - a former Soviet citizen, and now a citizen of Angola - Arkady Gaidamak. According to him, he was directly involved in Angola's contacts with "representatives of Russian state structures." Russia assisted the government of Angola by sending military advisers there."

Those advisors developed a plan to restructure the armed forces of Angola. Afterwards, "through the structures affiliated with the Russian Ministry of Defense," Gaidamak purchased the weapon, and in 2001 the Angolan army finally defeated UNITA. This assistance allowed Russia to subsequently obtain a piece of diamond pie from Angola.

Russia wrote off a large part of the Angolan debt ($ 5.5 billion) in November 1996, through Gaidamak's mediation. Swiss and French prosecutors had many questions about the transparency of that agreement. Why France and Switzerland, if the agreement was concluded between Angola and Russia? The trials ended with the recognition of illegitimacy of Gaidamak's persecution. Angola was supposed to pay the remaining part of the debt in hard currency, but there is no information about that payment.

Many years of war in Angola (41 years, taking account of the colonial wars) came to an end after the physical removal of UNITA leader Jonas Savimbi in 2002. More than two million people were killed during 27 years of civil war in the country. As many as 4.3 million became homeless and more than a million were left disabled individuals. Savimbi, by the way, was invited to become a part of the state property division elite in 1992, but he refused.

Many Angolans believe that with Savimbi's death, Angola lost the second Nelson Mandela. Others say that the country was finally given a chance to live peacefully. The Angolans have much in common with the Russians as far as the elections are concerned. They too dwell upon the "to be or not to be" question. The 80 percent, which the PMLA and Dos Santos received in the second parliamentary and presidential elections in 2008, clearly demonstrated the choice in favor of stability, not another war.

The third stage of Angola's development, which can be called "Chinese," began after the Civil War. China took advantage of the fact that the corrupt Angolan government had strained ties with the IMF. China proposed investments cheap goods to the country. According to China Daily, last year, nearly 40 percent of Angolan oil exports (about $ 20 billion) was exported to China, which accounted for 16 percent of Chinese oil imports.

Already in 2009, five years after the provision of first Chinese loans to Angola, the country became "one of the most important suppliers of oil to China" and "its biggest trade partner in Africa." Chinese investors build roads, hotels, and businesses In Angola, as well as the airport in Luanda. They import their goods in the amount of about two billion dollars a year.

Permanent President Eduardo dos Santos of Angola is going to have hard times in 2012, during the third parliamentary and presidential elections. He has been in power for 33 years. Many believe that it is a good reason to leave. Dos Santos admits that from every 100 Angolans, 60 live below the poverty line, suffer from undernourishment and shortages of drinking water, sanitation, health care, education, etc. Many Angolans believe that they could live much better, taking into consideration the natural riches that the country has. The people blame the president for their miserable existence.

However, there are no internal conflicts in Angola. The UNITA party does not take part in street protests. U.S. companies develop rich deposits of Cabinda. Why would they remake this market?

Therefore, Dos Santos, who still justifies the unemployment rate (40 percent), illiteracy (70 percent) and poverty (60 percent), with "the legacy of colonialism," should make a bold step and prepare a successor. Under the constitution, the president is elected for five years by universal, direct, equal, secret and periodic vote. The protest movement in major cities is limited to 100-200 demonstrators who work under pseudonyms.

The most ambitious one of them is Louati Beyrau, a famous rapper. "Angola is not Egypt. Angola is not Libya. Angola is not Tunisia," said the PMLA secretary of the province of Luanda, Bento Bento. In Angola, there is no another important factor of the "Arab spring" - the  developed system of telecommunications. Sending a text message there is difficult, not to mention the Internet.

The Angolans can indeed lead decent lives. The country's macroeconomic indicators are impressive. According to the report of the IMF's World Economic Outlook, the GDP growth was 10.5 percent in 2011. In 2012, the index is expected to reach 9.5 percent. Of course, this growth is possible owing to the oil industry. The industry gives more than 75 percent of tax revenues and 98 percent of national exports.

Portugal has never returned to Angola. On the contrary, the officially poor Angolans inundated the former mother country and, quickly became the fastest growing tourist contingent in 2011. They left about 220 million euros in Portugal. Dos Santos said: "Angola is ready to help Portugal cope with the financial crisis. We understand the difficulties faced by the people of Portugal. Angola is open to the Portuguese and is ready to help Portugal." Let's leave that on his conscience.

And what about Russia? Of course, after billions of dollars of Chinese investment Russia has nothing to boast. Russia and Angola produce and export oil, gas and diamonds. The commodity circulation between Angola and Russia in 2011 amounted to approximately $40 million, which was worse than before the crisis - 76 million dollars in 2008.