EU and NATO are Europe’s straightjacket 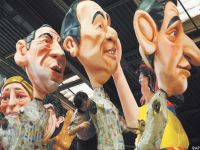 According to dictionaries, a straightjacket is a "garment shaped like a jacket with overlong sleeves, used to restrain a person who might otherwise do harm. Once the arms are inserted into the straightjacket's sleeves, they are then crossed across the chest. The ends of the sleeves are tied to the back of the wearer, ensuring that the arms are kept close to the chest with as little movement as possible. The sleeves of the jacket are sewn shut at the ends which means a significant restraint in itself because it restrains the use of the hands."

Europe is strapped into such a straightjacket, the two overlong sleeves being the EU and NATO. Both entities ensure that Europe has as little free movement as possible.

The common man and woman in the streets did not vote for entry into either EU or NATO, yet most Europeans are stifled by them, with a few lucky exceptions such as the citizens of Switzerland, for example.

In former centuries, the mentally ill in poorhouses and workhouses were strapped into straightjackets as a means to keep them quiet. It was cheaper than giving them medication or placing them in special institutions.

Is straightjacketed Europe a poorhouse? Yes, it is. Europe is on its way to becoming a so-called Third-World-Continent, with high debt rates, unemployment and poverty.

Is straightjacketed Europe a workhouse? No, it is not. Work is scarce in Europe, as jobs tend to wander eastwards. Jobs emigrate to such Asian low-cost countries as China, Indonesia and Malaysia, while most Europeans cannot afford or do not dare to emigrate. Europeans should follow the jobs and follow the money, instead of sitting back home, complaining and whining.

In the 19th century, straightjackets were considered to be a humane form of treatment, far gentler than the chains for the mentally ill in prisons.

Similarly, EU and NATO officials are telling European citizens that they live in far better conditions than poor Africans or unruly Middle Easterners, who will surely need some more bombing soon, should they not keep quiet and do as they are told by western imperialists.

Is there a way for Europe to escape the straightjacket? Yes, there is.

The magician Harry Houdini demonstrated an escape technique. He showed that it is possible to get more room by pulling at the inside of the arms as they are being strapped or by keeping an elbow held outward to gain slack in the sleeves when the arm is relaxed.
Houdini then wriggled his arms back and forth, finally hoisting them over his head and peeling the jacket off over the head. In one of his popular shows, Houdini performed the straightjacket escape while hung upside down from a crane.

Who is going to be Europe's Houdini, freeing the unhappy continent from the EU and NATO straightjacket?

Many people living in Europe are extremely desperate and furious at the EU imposed bureaucracy and the NATO imposed wars against Afghanistan, Libya, maybe Syria and Iran next.

Miraculously, none of these furious people ever make it to the top. None of them are serious candidates in presidential elections. Those elected serve as willing tools of their EU and NATO masters.

This might be a reason why many Europeans are cheering the return of Russia's President Vladimir Putin. He is seen as a possible savior of Europe, if he will extend a helping hand.

"We must create an axis Paris - Berlin - Moscow, which cannot be achieved within the actual EU limits. This will be the worst scenario for the Anglo-Saxons, but the only way to achieve peace for Europe," French journalist Christian Tallon writes in Agoravox.

He thinks that the empire will not calmly watch its own dissolution. The imperialist strategy, according to Tallon, is to "create chaos when things are getting out of hand. Rather than seeing better systems developing elsewhere, the empire will organize chaos.

Tallon thinks that Vladimir Putin's return as President of the Russian Federation is a major historic event, but it does not open the trap in which France has been caught.

"We are tied with hands and feet to the empire's ill fate. As the USA is gradually impoverished, it will demand more financial participation in its efforts of defense. To say it clearly, it will cost us a lot. We'll have to pay a higher tribute for our 'protection', in mafia style," Tallon emphasizes.

In the second part of his article, Tallon suggests that the first step for France (and Europe) will be to leave NATO and sign a non-aggression-treaty with Russia. The second step for the French will be to start repairing all the damage which five years of Sarkozy's regime have caused.

Remaining in NATO is a sure bet how to be embroiled in ever more wars and debts. NATO has turned into a dangerous monster that eats its own people.

Where is the Houdini who will wriggle Europe out of the straightjacket?

There was such a magician in the 1960s. France's President, Charles de Gaulle, protested against the Anglo-Saxons' strong role in NATO which straightjacketed the rest of Europe, leaving no space for independent national decisions.

In 1967, the US had to withdraw 200 military aircraft out of France and return control of the 10 major air force bases to the French. Later Charles de Gaulle removed France's Atlantic and Channel fleets from NATO Command. All non-French troops were asked to leave France.

SHAPE (Supreme Headquarters Allied Powers Europe) was transferred from France to Belgium, where it has been ever since, a shapeless monster squatting little Belgium, one of Europe's tiniest countries.

Is there a new Houdini anywhere in sight? Yes, there is, in the feminine and pleasant shape of Marine Le Pen, leader of France's Front National (FN). Born in 1968, twice divorced, a mother of three, a lawyer by profession, she is currently running for the French presidential election due at the end of April 2012.

Marine Le Pen has pledged to pull France out of NATO. She dislikes the Anglo-Saxon hegemonial aspirations as strongly as Charles de Gaulle did, regularly denouncing France's bandwagoning towards the USA.

In an interview by the Russian media Kommersant, October 2011, she said that she believed in a multipolar world and that France must revise its geostrategic relations to the USA. Marine Le Pen is a fan of Vladimir Putin. She advocates forging a privileged partnership with Russia, claiming that a French-Russian partnership is necessitated by "obvious civilization and geostrategic factors as well as French energy interests."

In her view, "France's interests are in Europe, but in Great Europe, including Russia." Charles de Gaulle had voiced similar ideas, 50 years earlier.

Marine Le Pen expressed her regrets about Russia being demonized by the European Union at the behest of the USA, which is trying to maintain a unipolar world. She values Vladimir Putin's leadership qualities highly.

"I think that Vladimir Putin has principles and a vision of the future that is necessary to ensure Russia's prosperity, which it deserves," she told Kommersant.

In the same way, maybe on a smaller scale, Marine Le Pen and Front National are being demonized in France, probably at the behest of the USA as well, which would like to see its valiant knight Sarkozy squander more French taxpayers' money on more NATO wars. Syria next, then eastward ho! To Iran!

Marine Le Pen does not join in NATO's cacophony on Syria. She does not demand for Syria's President Bashar al-Assad to demission. Neither has she ever said that Iran needs to be bombed because it might be producing bombs.

As president, Marine Le Pen will lead France out of EU, whose unbearable bureaucracy she deems too costly and anti-French. "Leaving the EU, we could allocate 15 billions of Euros to our French agriculture," she pointed out.

In her eyes, such internationalist organizations as the EU are directly responsible for the food crises throughout the world. She advocates France's food independence from multinationals.

Instead of the EU, Marine Le Pen advocates a "Europe of the nations," a loose confederation of sovereign nations, as opposed to the straightjacket of the EU and its luckless euro-zone.

"The Treaty of Lisbon is the gravedigger of the independence and identity of the European nations, forever eliminating the budgetary sovereignty of the states," she pronounced.

Implementation of the Euro entailed a rise in prices which have tripled, even quadrupled in certain EU countries, since the Euro was installed.

Many French people favor Marine Le Pen's ideas, hoping for an end of the EU's misery and NATO's totalitarian dystopia.

It will be interesting to see if and how the new French Houdini can wriggle both arms out of the straightjacket.