Bolivian President Evo Morales raised many eyebrows with his speech at the meeting of the UN Commission on Narcotic Drugs in Vienna. Morales urged the international community to let his country grow coca freely. 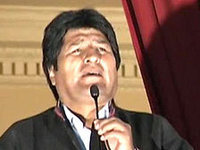 In addition, Morales promised to do his best in capturing large drug dealers. He promised to use all possible means for this goal, including helicopters, radars and airplanes. However, he acknowledged that drug dealers may have wider opportunities than Bolivian state structures.

The political struggle about the issue of coca leaves has been going on for 400 years already. South American Indians began to cultivate coca 5,000 years ago. The Europeans became familiar with the plant nearly 500 years ago. The Catholic Church stood up against coca after the Spaniards conquered the Inca Empire. In 1567, the Second Council of Lima banned coca chewing as a pagan ritual. However, the Indians continued consuming coca.

Scientists and medical specialists had been studying the qualities of coca as well. They particularly discovered that chewing coca leaves in the Andes was required for survival in highlands. Coca leaf tea is extremely popular throughout South America. The Indians also use the plant for various rituals. Coca is used in the pharmaceutical and cosmetic industry, not to mention the production of Coca Cola.

However, the Indians use coca leaves as a psychotropic drug. The narcotic properties of coca leaves are widely known. In the middle of the 19th century, European and American scientists developed a technology for the production of cocaine from coca. Afterwards, the South American countries, including Bolivia, became world's largest cocaine makers.

The majority of those, who live far from the countries, where coca traditionally grows, associate coca with cocaine. As a result, the UN included the plant in its anti-narcotic document. However, coca is something more than just a plant for Evo Morales, a former coca farmer. His distant ancestors were cultivating coca too, so his actions in defense of the plant are easy to understand.

Coca leaves played an extremely important role in the biography of the Bolivian leader. Morales knows it firsthand: coca is the only source of income for hundreds of thousands of Bolivians. The destruction of coca plantations in the country would trigger a national disaster for Bolivia. Poor Indians make the majority of its population.

Morales had been defending coca for many years of his career in politics. When he took office as the president of Bolivia, he became close with his Venezuelan counterpart Hugo Chavez and developed an aversion for the United States. US authorities still want Bolivia to put an end to coca plantations. No wonder - the Americans remain the main consumers of Bolivian cocaine. However, Morales believes that the United States simply tries to interfere in Bolivian affairs under the guise of the anti-narcotic struggle.

It is worthy of note that Evo Morales publicly chewed coca leaves on March 12, 2009 during a UN conference in Vienna. He said that he had been chewing coca leaves for 10 years and added that the habit did not harm his health at all. Hugo Chavez chewed coca together with his Bolivian friend as a token of solidarity.